According to the report, this increase indicates a jump from the $16 billion accumulated in 2016 and shows an annual growth rate of 8.5 per cent. While last year’s $1.4 billion growth range is slightly below the 2008 levels of $17.7 billion, it indicates that the music business has been growing since 2016 following a decline over the past decade.

While the growth of vinyl sales has yet to offset the broader decline of physical music sales, streaming has been the primary driver of growth, according to the report, growing revenues by 39 per cent year-on-year and adding $2.1 billion to reach $7.4 billion, representing nearly half of all revenues.

The major labels lead the majority of the market: Universal Music at $5.1 million (29.7 per cent of all revenues); Sony Music at $3.6 million (22.1 per cent); and Warner Music at $3.1 million (18 per cent), with the latter representing the biggest revenue growth rate and market share shift. Independent labels claimed $4.7 million in revenues (27.6 per cent).

Independent artists and direct distribution platforms such as TuneCore, CD Baby and Bandcamp represented the fastest-growing segment in 2017 with 27.2 per cent year-on-year growth. Collectively, the latter three companies generated $472 million of revenue, an increase of over $100 million from $371 million in 2016. Combined with independent labels, artists direct represent 30.3 per cent of global recorded music revenues in 2017.

The report concludes that the music market is increasingly diversifying, as seen with the abovementioned artists direct market outgrowing the rest of the industry, and that “the outlook for global recorded music business is one of both growth and change.”

The 2017 recorded music revenues figures are outlined in the below graphic. 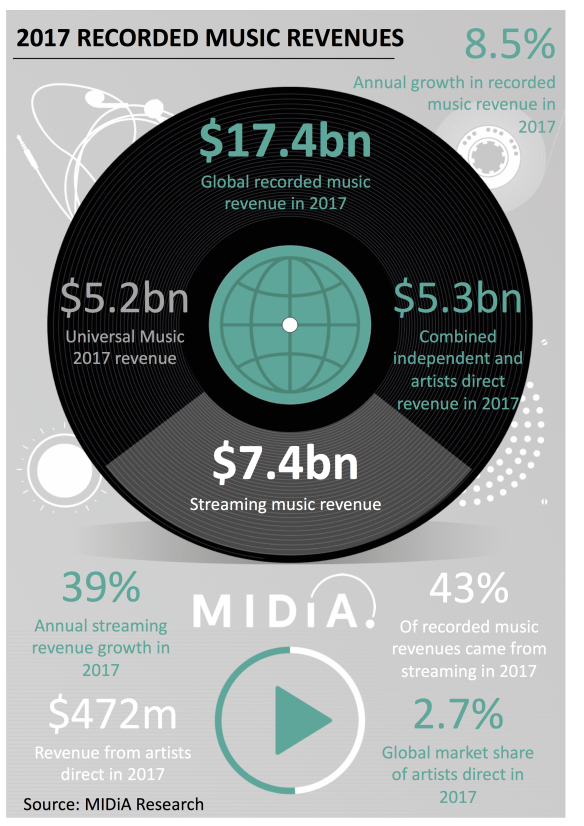