Little Simz is the uncompromising MC with a raw vision for UK hip-hop | DJMagAdmin.com Skip to main content

‘Grey Area’ is the most raw and direct record yet from Little Simz. DJ Mag talks to the MC and visionary about being in the public eye, growing as an artist and tackling politics in her music...

As listeners to the best music in 2019, we’ve become used to the fact that the stuff we dig probably won’t find its way into the mainstream, or appear on radio, so that thrill of recognition when a track from our side of the tracks suddenly and rapturously pops into everyday life, has gone. Or has it?

The other Sunday, I was driving up to Sheffield with Radio 1 on in the car. Suddenly an explosion occurred out of the speakers, a lunging, super-smart, heavy-assed, smoking hot hip-hop track that seemed to obliterate everything that preceded it and cast a baleful light on what followed. The track was ‘Offence’ by Little Simz, it’s from her astonishing new album ‘Grey Area’, and I have to ask the genius responsible — how does it feel hearing your music ‘out there’ in the nation’s lives like that?

“It’s always, for me, nervewracking when I put a song out, because I live with it for so long, and as soon as you put something out, it’s not yours anymore,” admits the 20-something London-based artist. “You open it up to the world, to people’s thoughts and opinions, which is scary, but at the same time I’m always excited to share what I’ve been working on, and especially with this new stuff, I’ve never felt more excited. When I hear my stuff live on the radio for the first time, I do think, ‘Oh my days, this is actually happening!’ When people, like friends and family, tell me they’ve just heard me on the radio, I’m like, ‘Oh, I’m really out here’.”

Simz has been operating under the mainstream’s radar for some time, crafting a discography that’s been utterly compelling. Listening back to things such as ‘Blank Canvas’ (as reviewed in DJ Mag back in 2013), and 2016’s astonishing ‘Stillness In Wonderland’ set, it’s clear that Simz’s development is unstoppable. Can you go ‘back’ on your music, or don’t you like hearing who you were — does it sound like juvenilia now? “No, I go back on my old stuff all the time,” Simz says. “I find it interesting to hear how I sounded five years ago, and compare it to how I sound now. Going back on my music is like going back and reading a diary. I hear the stuff I was talking about then and think, ‘Oh, I remember when I was going through that’. I like to remember how I felt in that time, and reflect.”

Simz, born Simbi Ajikawo to Nigerian parents in North London in the mid-’90s, started early, rapping and singing from the age of nine, hooking up with the Space Age collective of musicians, photographers and artists, and creating her first two mixtapes, ‘Black Canvas’ and ‘X.Y.Z’d’ at home in-between college lessons. The mixtapes gained her attention from hip-hop fans and artists — plaudits from Dizzee, Jay Z and Kendrick Lamar (who has said that “Simz might be the illest doing it right now”) meant that Ajikawo was rapidly plunged into a whirlwind of international touring and self-promotion, of being OUT THERE. For a natural introvert, this proved unsettling; ‘Stillness In Wonderland’ from 2013 was a quantum-leap beyond her previous work, a stunning conceptual suite of hip-hop, funk and soul that really reflected the way Simz’s outward persona and inward self-possession were battling each other.

Her new full-length, ‘Grey Area’ is her best, most direct work yet, and offers a fascinating contrast to ‘Stillness’. Where that album was diffuse, ambiguous, open-ended, ‘Grey Area’ is razor-sharp, heavy-hitting and lucidly focused. “Yeah, I definitely wanted this album to feel more direct,” she says. “‘Stillness’ was conceptual and went over a lot of people’s heads. On this album, even down to the first song, I made the concious decision to not do, like, a super long intro with dreamy sounds, I just wanted it to be straight in with the drums and that bass for ‘Offence’, and just get to the point.”

Sonically, ‘Grey Area’ is less exploratory, way rawer than ‘Stillness In Wonderland’, reflecting an increased concision that’s resulted from collaboration and the need to work from a totally clean slate. “Inflo, my producer, and I started this album from scratch,” Simz says. “I knew I wanted to make a record, but for a change I had nothing from years before, or anything that I wanted to bring back. It was all made in a really limited space of time — I locked myself in for a month and just built it from scratch.”

So the collaborators (including Chronixx, Cleo Sol, Little Dragon and Michael Kiwanuka) were similarly ad-hoc? “A lot of them were just in the moment,” Simz says. “I’d be like, ‘Damn, I know Yukimi would kill this’, and I always knew I wanted to keep making songs with Chronixx, he was always down to do some stuff, so I had him jump on. Michael just happened before wrapping up the album, and it was all kind of spontaneous. But at the same time, it worked so well, and with Cleo on ‘Selfish’, there’s no one else that could have sung that hook like her, so everyone was just perfect for that song and I’m so happy it’s so diverse.” 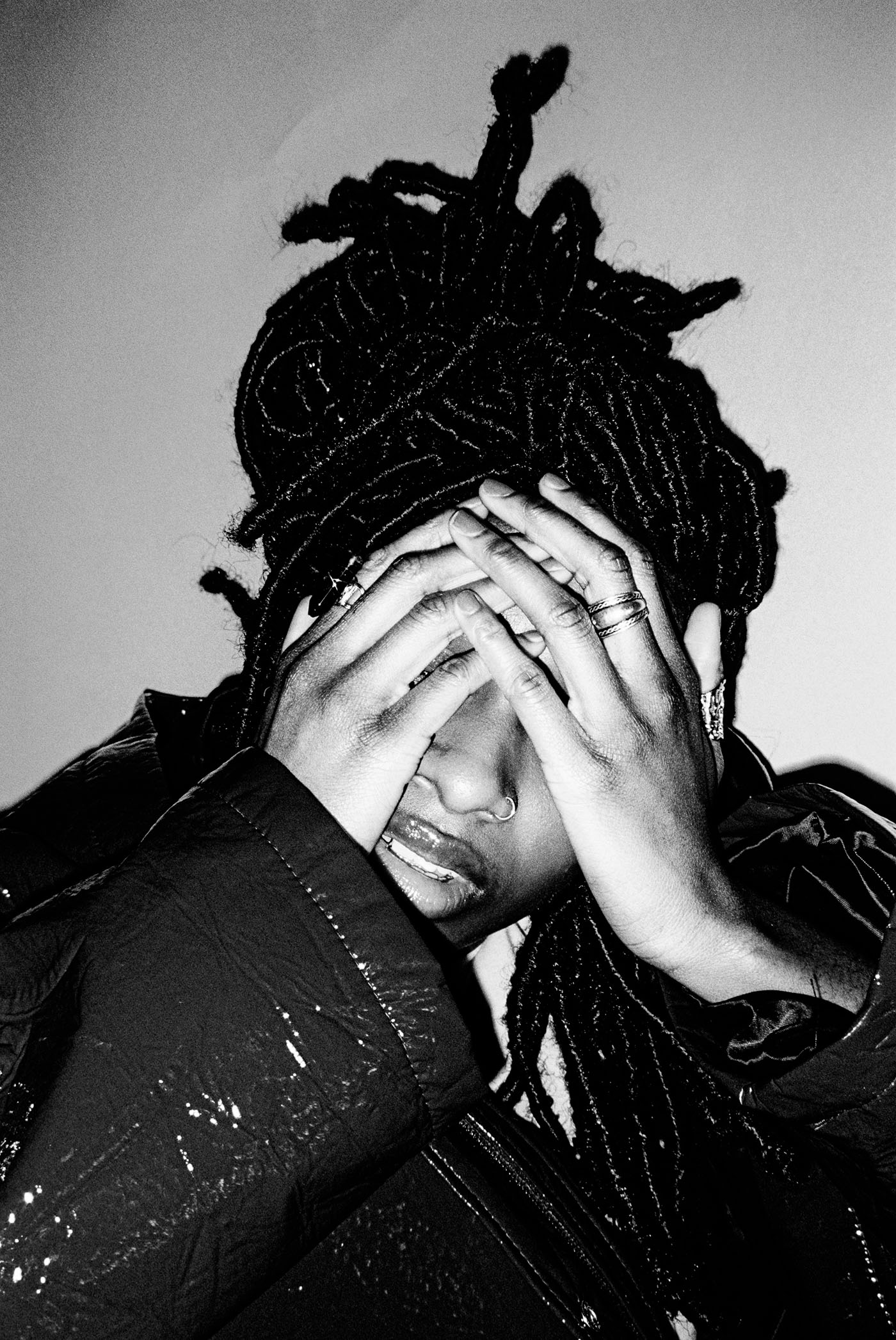 ‘Grey Area’’s title intriguingly hints at the tracks’ subject matter — the album finds Simz somewhere between youth and age, but also reveals her as an artist who doesn’t quite FIT anywhere in the current safe categories music and culture like to slot into.

“It’s a coming-of-age album,” she says. “It definitely reflects a point in my life where I’m going into my mid-20s feeling like, ‘Damn, what even is this place?’ There’s things I thought I liked, and now don’t like, things I didn’t like and now am actually really into — it’s just another part of me discovering and learning more about myself, and just feeling like nothing is really making the most sense. It’s not a black and white world for me, it’s that area in my life that’s shaded grey.” Including politically? There’s a real sense of fusing the personal and the political on this record, especially on tracks like ‘Pressure’.

“Everything I do happens on the spot. I was doing this when I was 15/16, so tapping into those subjects and those places and going back to those days was not difficult. Sometimes you’ve just got to put yourself back in that place mentally, and see what happens. As much as I’m a person that is aware of what’s happening in the world, I can still very much be in my own bubble, where I shut off completely from what’s happening, because I’m someone that really takes things on, and it actually effects me. So sometimes, I have to make the decision to remove myself. I know I have a platform and I know I need to touch on things that I believe need to be heard. ‘Pressure’ is a song that makes me feel like I’m freeing up all realness — with that song especially, I’m speaking about things that need to be spoken about. I’ve grown up on people like Biggie Smalls and Lauryn Hill, and their abilty to tell stories and be phenomenal inspired me, and inspired my writing, so I’ve incorporated that into my own work.”

What next? She pauses. Considers. “I’m always thinking about where to go next, how to improve, how to develop, but there’s no pressure involved. I never want to lose the fun element, not every song I make has to be heard.”

‘Grey Area’ demands to be heard. In a fair world, Simz would be a superstar already. Watch her rise.

Features
Alewya is unlocking her superpowers