Maribou State: How I Play Live

Maribou State: How I Play Live

Declan McGlynn
Facebook Twitter WhatsApp
Why was it important to you to develop a live show over just DJing?
"Playing in a live band is something we’ve always done, since we were young, and for us it’s the most natural way to showcase our music. I also think that it’s dependant on our music style, which in its original live form seems to suit venues over clubs, as well as earlier set times. They’re both important to us though, DJing and live, they just have to be approached individually and correctly."

How did you initially intend your setup to work?
"We’ve aways been committed to the idea that everything is as ‘live’ as possible. If it can be played, we’ll try and play it. We’re very proud of running little-to-no backing tracks from song to song."
How has the setup changed over time?
"The basic set up that we had around the time of the 'Portraits' album tour still exists to this day, it's just been added to over time, not just the instruments used but the number, also the number of players. Over the years this has resulted in our setup becoming quite large. It also means each member has a variety different responsibilities from song-to-song. But we never stop developing it, the functionality of the set is ever-changing in terms of MIDI routing, playback system, FX chains etc." 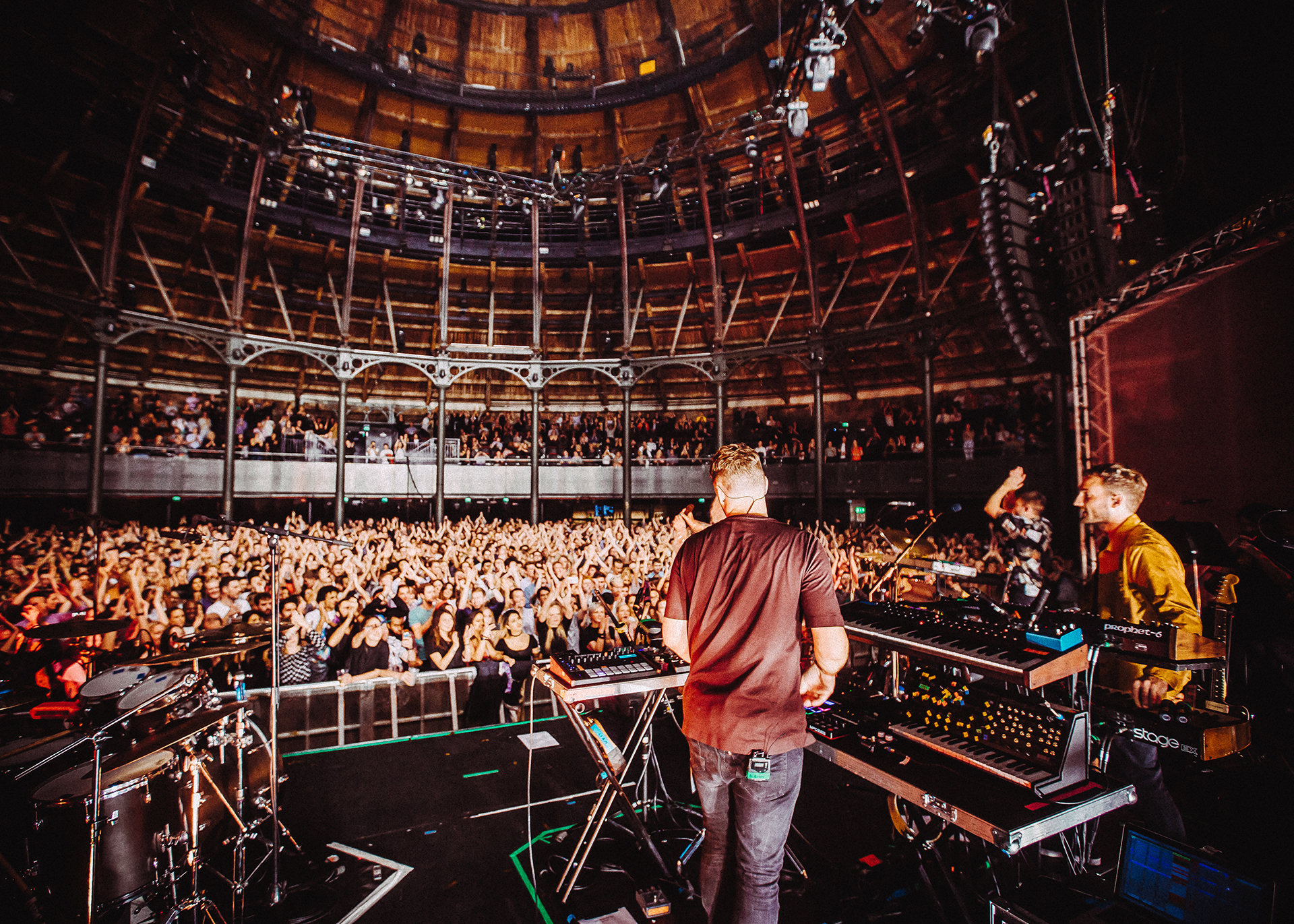 Pics: Sam Neil
"Jonjo has a Moog Sub37, Akai MPD266 – controlling a sampler built within Ableton – a percussion set up (ride cymbal, cowbell, various shakers, Quinto conga and bongos) and his bass guitar setup, which is; Tech 21 BSDR SansAmp Bass Driver DI V2 Pedal, JHS Milkman Slapback Delay, Aguilar TLC-COMP Compression Pedal Bass. We have a a Fender Precision and a Jaguar Deluxe. There’s no amp in the set up other than for monitoring. Jonny plays an Acoustic five-piece drum kit with Roland SPD-SX, KT-10 Electronic Kick pedal, a trigger on the snare and an extra V-Drum, both linked into the SPD, which is sent MIDI from playback rig for certain things. Vocals are run through a Boss Space Echo pedal but as of next tour, an original Roland SRE-555."

What are the main challenges in the setup as a whole?
"The main challenge for this setup is preparing the tracks to be able to play them. It requires a lot of time spent programming and bouncing sounds out prior to playing a new song: because there are so many elements to it. Once it’s running it’s a super efficient setup that feels intuitive and has little room for error or malfunction." 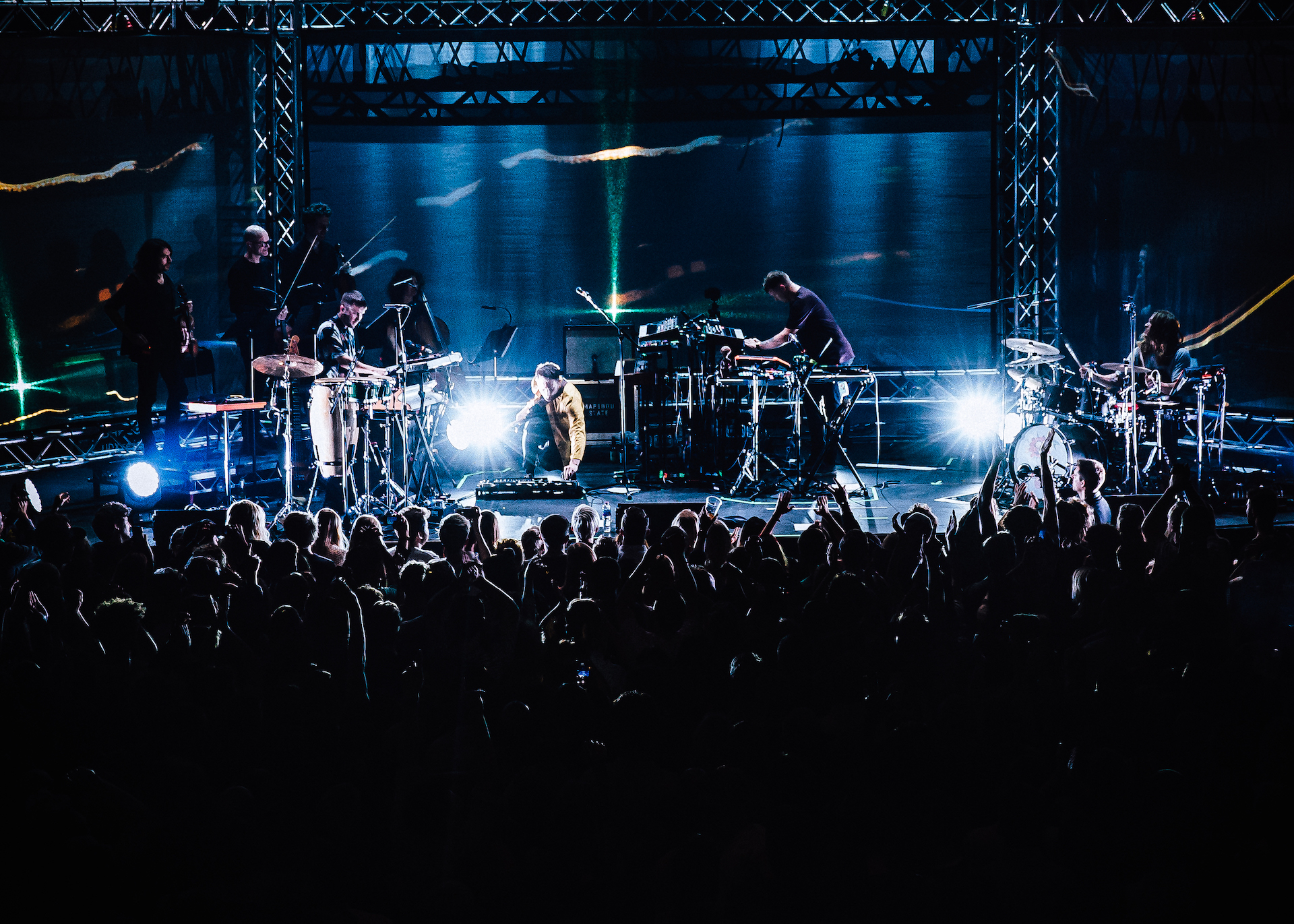 What advice would you give to someone who wants to take their music live?
"I think you just gotta have fun with it. When we first built the show for the Portraits tour, there was quite a lot of audio tracks running on the playback and at times it didn’t really feel like we were fully playing the music. There was a disconnection and it resulted in us growing tired of the show quite quickly and feeling a bit stifled with our setup. We started pulling parts off of the track until there was almost nothing left running on the laptop, which made the show much harder to perform but it put the fun and challenge back into it and kept us all fully engaged and connected to the music. Ultimately you just have to have fun with it and challenge yourself. A big tip also would be to understand you kit inside and out."
"Ultimately you just have to have fun with it and challenge yourself"
What do you think is behind the current growing trend in live electronic music?
"I think there are many sides to it. One part would be due to the ease in which people can now perform their music live. For very little money you can grab yourself a computer, a copy of Ableton Live and some kind of sampler/controller and you’re ready to go. The technology is better and cheaper than it’s ever been and that must be playing some part. There is also more suitable spaces for artists to play their music live. Venues have upped their specs a lot and are capable of hosting larger electronic setups. Not too long ago the spec wouldn’t have mattered as much when guitar music was leading the live scene as bands could just turn up and crank their amps up.
"I also think people are just more aware of electronic music now too, the music isn’t as underground as it once was, there’s a lot more electronic music creeping into the wider audiences view, which is great, and as such people are more exposed to the electronic instruments."
How did you go about adapting what you do in the studio to the stage? How do you decide what’s ‘played’ and what’s not?
"It takes a lot of prep and also a lot of trial and error. Initially, we mostly try and play the songs as they are on the record and then in some cases we develop them further to either suit the live environment better or to suit the live set up better. In terms of what is being played we just sit down and go though the session file of the track and pick off parts that suit our individual setup and discard parts that we think won’t be needed." 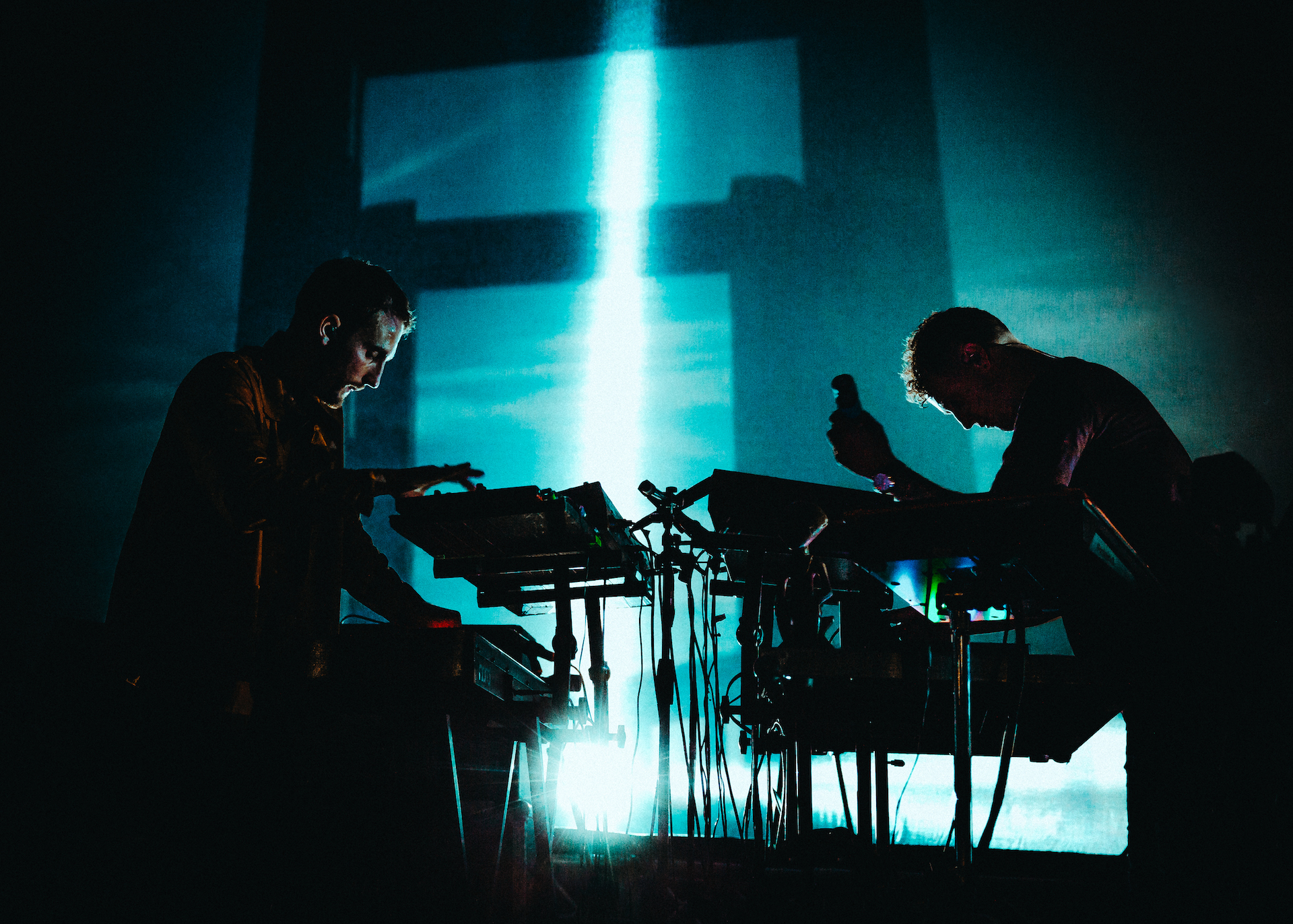 "We work through the whole track making sure everyone has something solid to do, then, initially, we keep all the little samples and extra bits running on the backing track. Once we’re more confident with our parts and have the track running well as a band, we can start to figure out who has a spare hand when and where to trigger samples, so we start pulling off sounds from the backing track and putting them into our individual setups; making it more live. The intention here is to remove everything from the laptop, though for some songs sadly that’s just not a reality."
What piece of gear would you love to add to your setup and why?
"From a practical stand point I’d like to add a redundant laptop set up into the playback rig: to make sure we don’t have any issues with laptops failing us on stage. I’m currently playing an MS-20 mini so I’d like to swap it out for an original one. More guitar pedals are always welcome and we’ve always loved the idea of adding a big marimba into the show!"