S.P.Y. is bringing classic jungle into the future | DJMagAdmin.com Skip to main content

S.P.Y. is bringing classic jungle into the future

S.P.Y. is bringing classic jungle into the future

Bristol-based Brazilian S.P.Y has just made the album of his career by looking back to early jungle. But as he explains, his recreation of the classic UK sound went far deeper than most...

Everyone’s a junglist these days aren’t they? You’re a junglist. Your dear old dad’s a junglist. Even that nice little old lady next door and her dog claim to be junglists. Everyone’s a junglist, marching into a bleak future to the tune of a hundred foghorns, skanking towards the light at the end of the tunnel to a parade of amens, saying they were there in ’92 when they weren’t even born, and inflating the price of second-hand Reinforced 12”s in the process. Everyone’s a bloodclart junglist.

Except most of us aren’t true junglists at all, are we? Drum & bass fans? No doubt. Jungle appreciators? Of course. But true junglism is in the craft and curation, not just the consumption. It’s in the melting pot approach, it’s the creativity found within tight limitations. Most importantly, it’s the innate understanding of the ancient Jamaican art of dubplate culture. That undying urge to push things forward and create something that no other DJ has got: specials.

“Being a jungle or drum & bass DJ is not about downloading or buying music to play,” says Carlos Lima, the Sao Paulo-born/Bristol-based artist we all know best as S.P.Y. “It’s literally producing brand-new stuff all the time, so I have something different for every set. Specials, edits, remixes, new tracks. I’m not doing my job if I don’t have these. I’ll just be a DJ who has access to the same promos as other DJs. I’m sorry, but that’s not me.” He’s talking to us from his Bristol studio just weeks away from dropping ‘Dubplate Style’, his third and, arguably, most remarkable album to date. Philosophically, technically and creatively, it’s jungle to the core — a sound that he’s loved since he was a kid in the mid-’90s, and grew up to move over to its spiritual stomping ground of London to learn English and study graphic design in the early 2000s.

Lima loved mixing jungle, and collecting it. He loved everything about it and was there on the ground in his hometown of Sao Paulo, one of the first non-UK cities to truly develop its own jungle / drum & bass scene and community, following the likes of his city’s elders Marky, Patife and XRS. He can even remember when jungle records first started to infiltrate the city, how imports cost £30 a throw, and how a crafty bootlegger pressed up thousands of cheap copies of V and Metalheadz records, and accelerated Sao Paulo’s jungle transition faster than you can say ‘massive’. But even back then, he wasn’t a true junglist.

S.P.Y’s chronic junglism grew slowly over the course of the proceeding years, as his career ambitions gradually switched from design to rewinds. Releases and support from some of the genre’s bona fide titans old and new encouraged Lima, each single exposing him deeper and deeper to the roots of the craft. Between 2006 and 2011, Metalheadz, Soul:r, V Recordings, Med School, Spearhead, 31, Inneractive, Innerground, RUN DNB, Commercial Suicide and Quarantine all proudly sported his increasingly versatile style, before he signed to Hospital in 2011 and consequently consolidated his junglist stripes. The biggest label in the genre, Hospital seems the most unlikely imprint to incubate this. But, as Carlos explains, it was the freedom and resources the label gave him that really galvanised his jungle status. “Hospital asked me what I wanted to do next,” he says, “and I said, ‘I’ve always wanted to do a jungle album’. I had some sketches, but I wanted time to go in deep and properly explore it.” 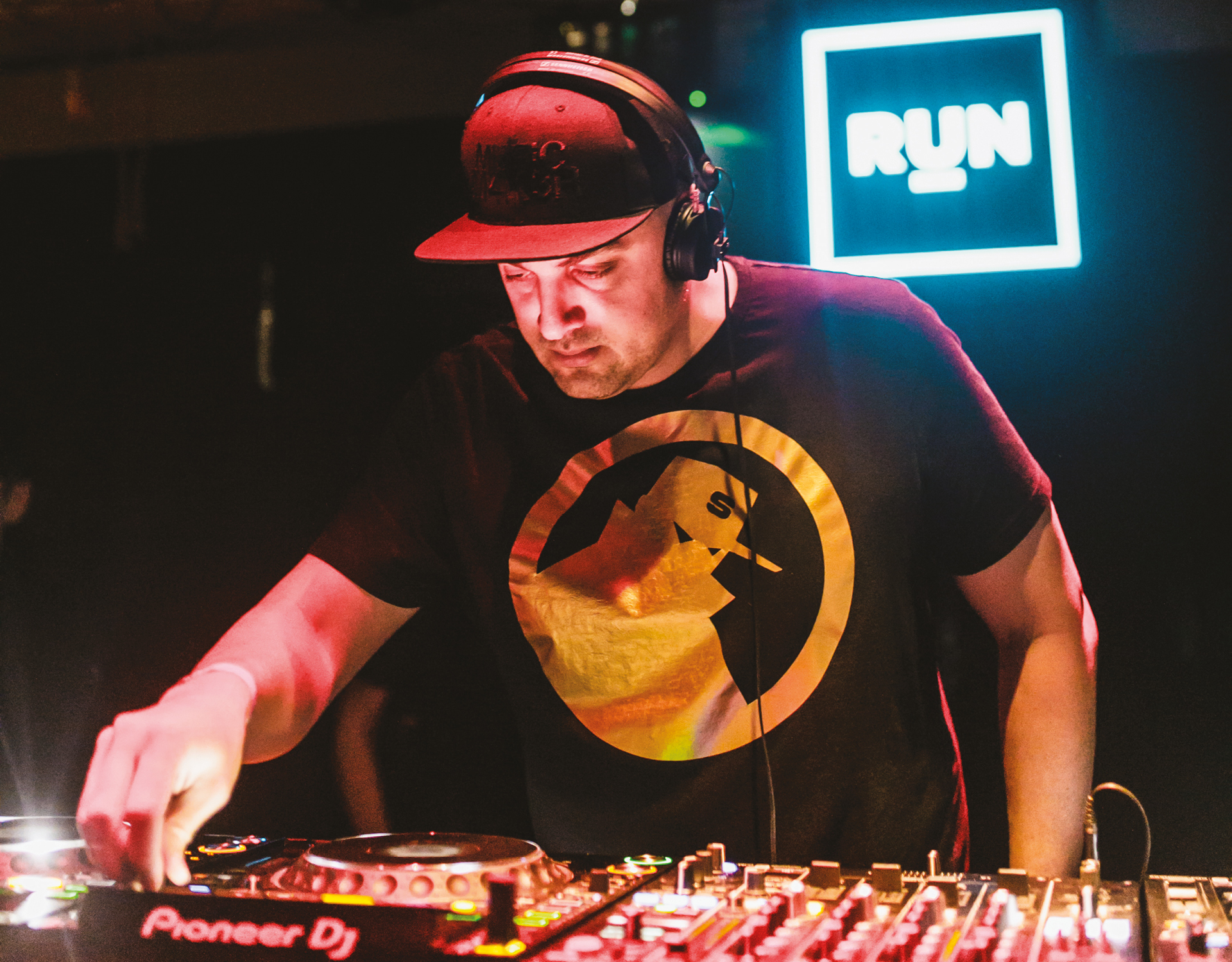 The clue is in the word ‘explore’. This wasn’t about whacking an amen and a reggae sample together and calling it a soundsystem banger; this was about the sound, the textures, the techniques and mind-set. It was about taking everything he’d learnt over the course of 11 years of releases and touring, and flipping it. Carlos wanted to research, celebrate and ultimately imbibe the raw culture that founded the music he’d fallen in love with. He had deep talks with Remarc, Nookie, 2 Bad Mice, Fabio, Chris Inperspective, Total Science and many more pioneers. He amassed the machines that were popular during jungle’s inception; the Korg Trident, Korg MS2000, Roland JV 2080, Roland Juno, Yamaha PG500 and Korg Electribe drum machines. Even down to the DJing style: goodbye double drops, hello long roll-out blends. If S.P.Y was to make jungle records and perform with them, everything about it was to be authentic to the craft and true to his vision.

“They said, ‘Okay that’s fine, do a jungle album’,” Lima says. “That was literally it. Nothing else was requested or briefed. I could just go and do it. I told them how I wanted it to look and sound, and be presented, and they gave me free reign. I had no other ambition than to release an album I’m pleased with, and feel I’ve accomplished something. And they let that happen. They enabled what I wanted.”

He’s quick to note that it’s not the first time this has happened. Encouraging Lima to be his best, S.P.Y has been a consistent thread during his tenure on the south London label. His debut album in 2012, ‘What The Future Holds’, was a pretty diverse but predominantly heavyweight document that secured his position as one of Hospital’s biggest new generation players. It dropped as d&b was nearing its most vocally saturated, commercial airwave-chasing chapter. Two years later, he was digging deep into roller craft and more vocal-based tracks on his double album opus ‘Back To Basics’. He followed it with his last album-sized EP series, ‘Alone In The Dark’, a demonstratively club-focused banger parade.

Both were written during neuro’s most dominant charge throughout the mid 2010s. “My wife pointed this out to me,” Lima says, who’s not just about to drop the album of his life, but has also just become a proud father. “I don’t do it on purpose, but I seem to swim against the current. If things are quite light, I’ll go dark, if things get dark, I seem to go a little lighter.”

This time, trends have aligned in a different way, and Carlos has approached this album in a very different way, too. While his previous LPs have been broader in sound, ‘Dubplate Style’ is a much more focused concept, and lives within its own project. He does special Dubplate Style jungle sets, and hosts Dubplate Style events with more jungle-aligned DJs. Rather than developing the style he’s already established, it’s a whole new perspective on everything he’s done. It’s also important to note that he’s not the only man on a jungle mission right now.

As we’ve already observed, the word’s being thrown around more readily than pub grub at a sesh these days, and can be applied broadly across the bass spectrum from Paul Woolford’s Special Request alias to the rise of DJ Hybrid and his Deep In The Jungle collective. Most notably, though, is the forthcoming jungle exploration from fellow scene titans Chase & Status: ‘RTRN II JUNGLE’. Written around the same time as ‘Dubplate Style’, neither act could have possibly known that the other was on a similar foundation-exploring flex. But rather than take any light from each other, they come from two entirely different schoolings and show how broad, fertile and exciting jungle music and culture is. “We’re both going back to the same era, but in two totally different ways, and will have two totally different takes on jungle,” Lima says. “But that is the beauty of this.”

His own take didn’t just include using the same tools original jungle was written on, but also created the same limitations the producers at the time had writing. “When I started it, I was going wrong by starting to produce the tracks like how I produce my S.P.Y stuff. But that’s not how the original tracks were made. The original tracks had so many limitations. So, for example, I’m not allowed to use more than 15 channels, because that’s more than what they had back then. If something needed more than 15 channels, I’d have to solve the problem. I had to be creative, but the limitation kept me feeling inspired.”

Inspired and stacked with tracks that no other DJ has. Which is where we hit the heart of the ‘Dubplate Style’ story and Carlos’s chronic junglism. While the album rolls with more consistency, conceptual focus and timeless jungle dynamics than his previous albums (and even contains a generous helping of 130bpm UKG and breaks-inspired jungle), for S.P.Y, the true essence and allure of this project is that original jungle facet of having something special to offer his crowd — plates that no other DJ has, and that can be built up the classic way. It’s no coincidence that the genre at large is fixated with jungle, and there’s been more talk about dubplate culture in drum & bass these last two years than there has in the last decade. It’s the perfect antidote to the age of digital abundance.

“It’s interesting,” Lima says. “My Hospitality In The Park set was almost 100 per cent dubplate, and there are so many people dying for a tracklist, but nobody knows what the tracks are. There’s a tracklist that keeps getting filled in as the tracks are slowly coming out, but it’s great to see that people are anticipating things, showing real interest and hype for new music. That’s inspiring and fulfilling. Don’t get me wrong, sometimes it’s very difficult to not play a big tune when you know the dancefloor will erupt, but I’m more from the position where it’s like, ‘Listen, I’ve got something to share with you guys’. If I have to clear this dancefloor right now and build it up again, then so be it.”

Want more? Read our feature with Benny L, one of the most in-demand names in D&B right now