Andrea Oliva was born and bred in Switzerland to Italian parents. And yes, he does often get confused for a member of the fairer sex. But it's OK, because Oliva is completely tuned into his emotions and comes across as decidedly philosophical and grounded, despite holding one of the most enviable residencies at one of the best clubs on the planet — ANTS at Ushuaia.

Famously, he's one of those DJs that started out in his early teens, taking some influence from an uncle who produced chill-out and ambient music. “He introduced me to electronic music and then I discovered DJing by some friends at a youth club,” Andrea explains to DJ Mag.

As the Ibiza season draws to a close, Oliva will then take a pitstop at ADE before heading off for a tour of South America that'll see him wooing the crowds in Brazil, Chile, Columbia and Argentina.

His debut album '4313' on Objektivity came out at the beginning of the summer. It's a sparkling, underground release made up of some proper house music that only increases our love of his vibe and the music he produces.

We've seen that you've described yourself as the happiest DJ...
“Well, everything can happen really fast, it can be positive and it can be negative. So sometimes you forget how lucky you are when things happen like this. I think if you approach your career in terms of telling yourself you are always happy with what you have, you probably stop comparing yourself to other DJs and I think this gives you a longer life.”

Traditionally, DJs and artists are recording their music during the winter months, was that the case for your album?
“Well, the thing of doing the album was an idea of Dennis Ferer and Andre Hommen from Objektivity, they asked me last year in the beginning of the season if I could imagine doing an album for their label. And I had a lot of music already but then I was never thinking about doing an album, actually. But I said yes.

Because also it was the first album Objektivity had ever released and it's a nice label that has existed for 14 years — and it's a special thing. I started last year around September, so it took me almost a year to do it.”

Maybe this is a really obvious question, but what does the title '4313' mean?
“It's the postal code of the village I was born and raised in in Switzerland. It's a very small village, there's maybe 8000 people living there, I'm surrounded by cows and friends and family. And it's also the place where everything started.”

That's a really nice idea...
“Well, we were thinking about names but it's so hard to give names to albums and music. It should be something that when you look back in 20 years and you read the names of your tracks, you probably think 'What happened to me 20 years ago?'. So '4313' makes sense.”

It does make sense, and it's a good contrast because numbers are electronic but a lot of the titles and the sound of your album is quite organic and refers to the elements in a way...
“Exactly. I think, in our scene, when you do an album it's also because you want to show how diverse your music can be. Always with an artist in our scene releasing an album it's not because he wants to make millions out of it, because you won't, it's because you're gonna show the evolution in your artist being.”

Now that you've done that, are you looking to the next one already?
“Yes. I have some music coming out in the next couple of months. I have a new track on Desolat coming up. And then I have a collaboration with Livio and Roby as well. And then, when we did the album we released a single before the album, then we released the album and then we're going to release a single after the album to end the whole story. We're still waiting for the licensing department, because I sampled one thing on the album from a funk artist, and we didn't get the licensing for that track, so we didn't put that on the album but we are super-lucky to have almost a 'go' now, three months later.” 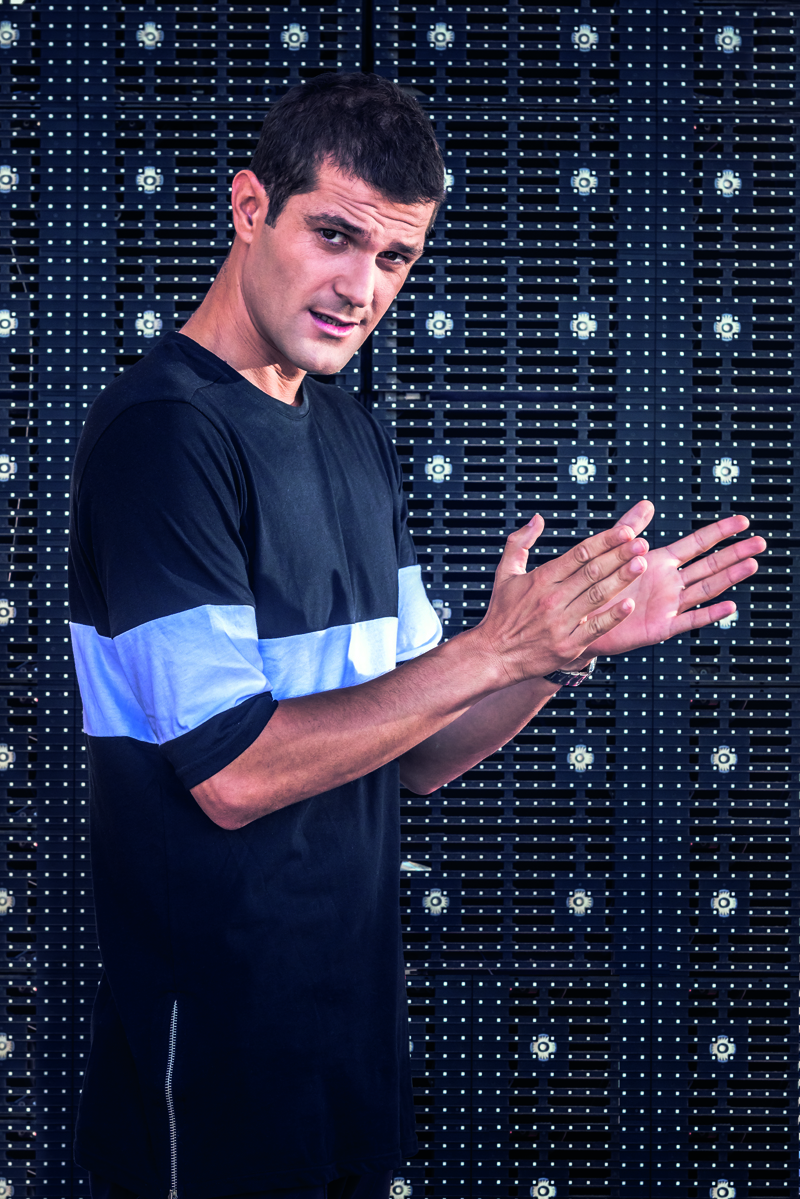 Do you feel a pressure to make tracks that are forward thinking?
“I think the problem we have in our scene is that people are always trying to be cooler than the other ones, and there are people who are always thinking and acting that being strange is the new cool and being different from others is the new cool.

If I would put pressure on myself and say, 'Oh, I need to do different things in order to be forward thinking', I probably wouldn't be able to finish a track. It's pressure, and I think when you do music you should look left and right, you should just go with what you feel in this moment.”

In the same way, is there a pressure to playing differently for the really big crowds, because what you do does have a very underground essence to it...
“The pressure is always here, like when you get an offer from a really big club and you think, 'Oh, if I play that big club what is the scene thinking, that you're playing it because you've been offered a lot of money?' Also, 'If I release my track on that label it's only because I want to sell more records because that label is more commercial'. Or 'If I play a big club and I can't pack it, or if I do my own party in Ibiza and it's empty'. There is always pressure.

“You are like a little fish surrounded by sharks. This industry makes the stars, it kills the stars, they have conversations with themselves, they ask the questions and they answer the questions. If you just go with the flow with what you feel, you don't feel the pressure anymore.

I felt the pressure years ago but I'm not feeling it right now. I like to feel the pressure when I go on stage and I see a lot of people in front of me and I think I owe them a good show and I want them to go home with a smile. But I don't put myself under pressure when it comes to, 'I need a hit now, I have to go into the studio to make a bomb'.”

Do you think it helps that you have over 20 years of experience, because a lot of DJs now are coming from almost nowhere...
“You know, I started very young and after school everyone goes to work somewhere in Switzerland, so a lot of my friends worked in offices and stuff and I went to work in record distribution. I was playing a lot in Switzerland and I was super-young.

And after I had my own parties I invited all the DJs, and I saw the scene growing. And I kind of saw all different situations and different faces of the scene. There are things which you can see coming. So I'm very realistic, that's why I don't get super-euphoric when things happen but I can be happy at the same time.”

You've played our DJ Mag Sessions party and you seem to have a lot of gigs in the UK, are we taking you under our wing?
“Yes. I think the UK has been very important for the global scene. The UK has amazing clubs and the biggest festivals, but also there is a different music culture in the UK when we talk about electronic music. You have Radio 1 supporting this kind of music.

I don't know any other radio station in the world who supports it like that. I played the Radio 1 anniversary party in Ibiza and the feedback was so huge, probably if I played the opening of the Olympic Games I wouldn't get that feedback.

For example, in Switzerland they don't play electronic music on the radio. So the UK is super-important and also the UK crowd is very supportive. If you can do well in the UK market, it's one of the best things that can happen for your career.”

News
Fatboy Slim announces Back To Mine mix album