On Cue is our flagship mix series, celebrating the pivotal DJs and producers whose influence has shaped the world of electronic music, both in their local scenes and beyond. This week, Nina Las Vegas steps up with an hour of high-energy club sounds and radiant percussion, and chats to Miriam Malek about authenticity, audience interaction, and adapting in strange times

Nina Las Vegas has cultivated a fierce reputation for herself as Australia’s queen of club music. Hard work is something she’s always risen to, but when we first talk over the phone in early March there’s a hint of heartbreak in her voice: she’s stuck in London, and has, like so many others, had numerous show cancellations caused by the rapid onset of coronavirus across the world. The pandemic has seen artists everywhere lose out on income, but it’s precious time alone that Nina won’t waste, as she pours her energy into music-making and managing her label, NLV Records, from afar.

Hailing from a small regional town in New South Wales, Australia, even from a young age Nina threw her enthusiasm into everything - whether that was nourishing her theatrical side, playing a role in musicals like Chicago, or through taking part in sports and playing piano. Her flickering passion for the creative arts has shepherded her throughout her career. Although being a DJ and running a label takes up most of her time, and then some, she still makes it a priority to foster her artistic pursuits, dedicating up to two days a week to create new tracks. Nina only has one rule for these “bangers and thumpers” - that they can be played loud and proud in a club.

“There’s no rules or pattern anymore,” Nina explains, frankly. “[For example, if you think about] pop music, I can’t predict if the next Lady Gaga is gonna be big, I can’t predict if Tones and I will have a viral hit, you just don’t know.” In the midst of this audience-driven era of music, being proud of her work has become the most critical measurement of success for Nina, but she balances that with a playful attitude to production and never forgets the importance of fun. “I don’t think [people] need to have an existential crisis to make a club track,” she laughs.

Making a beat for Nina means beginning at the drop and working backwards. That process steals an insight into how triggering strong emotions from the audience is at the core of the way she operates. Continuously adding to a growing portfolio of club tunes – check out 2019’s ‘One Thirty’ and ‘Tananaram’ – Nina doesn’t plan to put out an album any time soon. Instead, she plans to keep flowing with the fast-paced and often relentless way music is now consumed by the masses, using her platform to float out new sounds to her audiences and groove with their changing appetites. “[A spotify hit or a viral hit] helps but that’s not what it’s about,” she says. “Authenticity is such a big part of the game and I do think that good songs made by good people really reach people.” This new and faster-than-ever way that listeners consume music might seem nightmarish for artists who approach their tracks like compositions to be listened to in the context of a full album, but for Nina releasing singles alongside touring and managing a label is perfectly suited to her DIY approach, and her refusal to take on just one task at any given time.

As a DJ and radio host, crowd interaction has always been a key part of Nina’s career, whether that’s been through receiving messages through the text line on Australia’s national alternative music station, triple j, where she worked for over a decade, or through playing to smaller or demanding crowds during her early days of DJing. Flexibility and an ability to read the room’s energy were crucial for her success and later became defining aspects of her performance style. “I think the audience is just as important as my ego, so if I have to bring it back, play it dumb, or make it cooler, I am ready,” she says. “I prepare a set to a point, but I know I can go darker, deeper or harder, or more ‘wedding party’ if I have to, and I think that’s a skill, and I like DJing for that reason because I always have fun.” 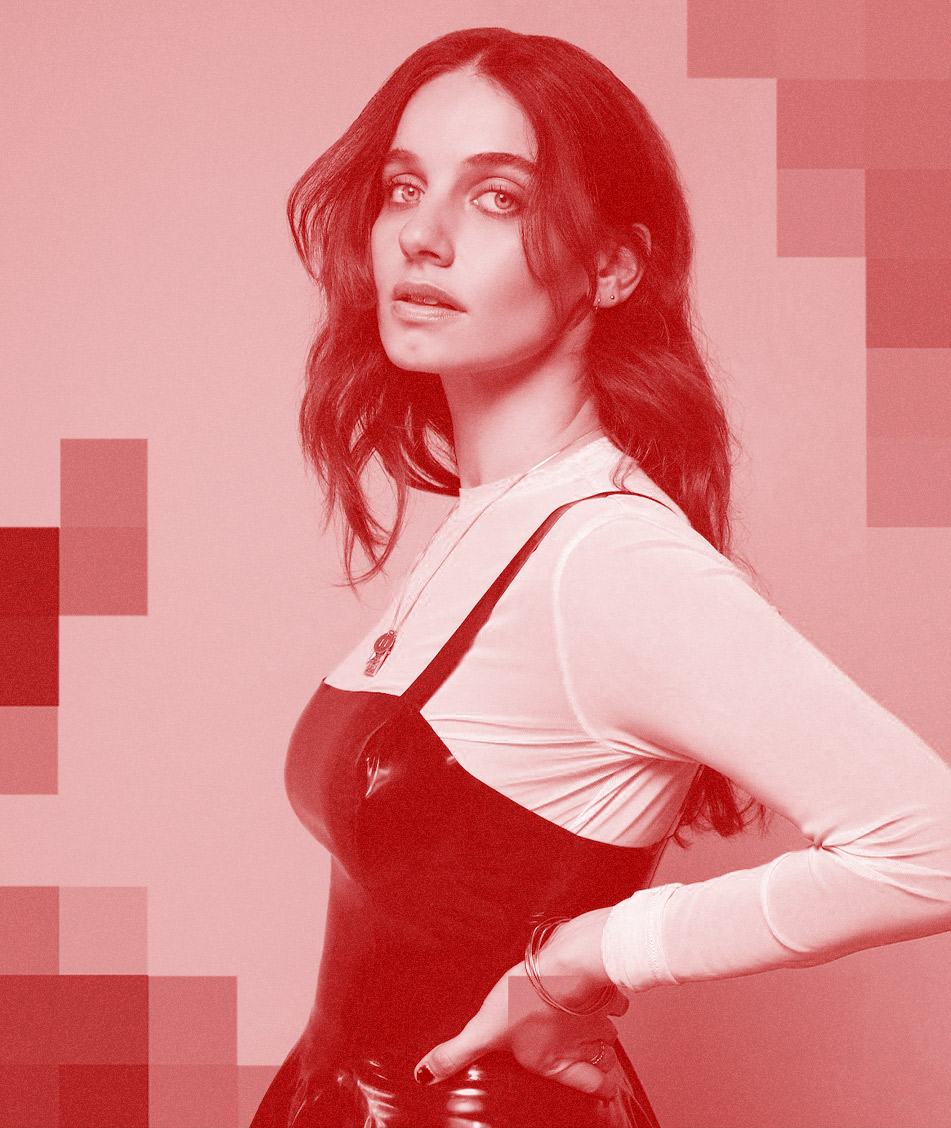 While it’s true that Nina has the magnetism of a performer that’s always down for a good time, she hasn’t shied away from getting sentimental in her music when it’s warranted. Her ‘Lucky Girl’ EP, released in 2018, married Nina’s affection for pop with glitchy breakbeats, all fused with a heavy dose of ‘80s-style melancholia. Meanwhile, ‘Deserts’, released in 2017, was dedicated to her family's journey emigrating to Australia from Egypt in the '60s. Coming from a mixed ethnic background, with Armenian heritage on her father’s side, Nina has said she’s keen to learn more about music scenes in the Middle East, having directly experienced the kind of cultural bias against places like Cairo, a city she’s visited several times, and has fond memories of. “I’ve been itching to see those underground scenes because I’ve experienced first-hand how the perception of what a city like Cairo is for tourists versus [what it’s like] if you live there, and it is so different.”

In recent years, playing international shows has taken up a lot of Nina’s time, but a large chunk of her work remains in Australia. Having come up through the Sydney scene, she still keeps a foot firmly in the city and in the country at large. During the county’s devastating bushfire crisis, which lasted from mid 2019 to early 2020, Nina revealed that, for a period, NLV Records would donate 100% of Bandcamp profits from 2019 releases to initiatives including NSWRFS, Country Fire Association and Red Cross.

In the weeks after our initial conversation, much has changed around the world, and, in the midst of a world-altering pandemic that has taken a considerable toll on the electronic music community and its players, Nina has made it home to Australia once again.  "When I did this interview, the word pandemic had not yet been officially used,” she tells us. “I'd already lost a stack of gigs, so was getting into the headspace that 2020 was going to be super odd, however not this odd. After a nightmare travel week trying to leave London and get back to Australia, I am lucky enough to feel safe near my family and with a roof over my head. I hope that everyone is staying inside and being kind to those that can’t."

While tour cancellations and festival postponements have left countless members of the dance music community uncertain about the near future, at the time of writing, there remains a quiet hope in the scene that by the end of summer some festivals and shows will be able to go ahead. In August, Nina will hopefully play her scheduled back-to-back set with her best friend and beloved scene-mate Anna Lunoe at London’s SW4. It will be the first time they’ve played together in years and will come hot off the back of their collaborative single released last year, ‘One Thirty’. ”We have so much fun playing together,” she says. “London gets it and no one else gets it because of the timing, so it’s really cool.”

This month, her new track ‘Impossible’ will be released, which features the rapper Thai Chi Rosé and which she describes as “energetic Jersey Club influenced/hip-hop fusion, expressing the freedom to do the impossible.”

The artist-fan relationship is paramount to Nina’s own happiness as an artist: that’s the case in both her DJing and musical output, and it’s obvious that Nina feels some sense of responsibility in making sure that the people listening to her have a good time. Audience experience will be even more important in the months to come, Nina muses, as coronavirus spreads and nighttime gatherings we know them are put on hold. The DJ’s role in creating a special space for the audience to have fun will move to digital spaces, such as radio shows, streams and mixes, as we all grapple to come to terms with our new reality. “The interaction with the audience has [already] changed, they drive so much,” she says.

While focussing so passionately on one’s audience may be a development that some artists could rally against, questioning the impact it could have on the personal integrity of an artist, Nina has adopted a mentality of gratitude, feeling blessed to have the opportunity to watch first-hand as audiences decide which sounds thrive. “I’m lucky to see the interaction of a song go really well and say ‘okay, this is what’s up’, or you play your own demo and people react to it in the same way as they would to a song they’ve heard a million times over, it’s a real position of power to be in.”

Nina Las Vegas On Cue mix is a radiant, percussive trip of full-throttle club sounds, and makes for a perfect hour of escapism in these uncertain times. "This mix represents my headspace while in mandatory quarantine (hello international travel!),” she says “Going a bit bonkers, random and trying to squeeze everything in at once.”