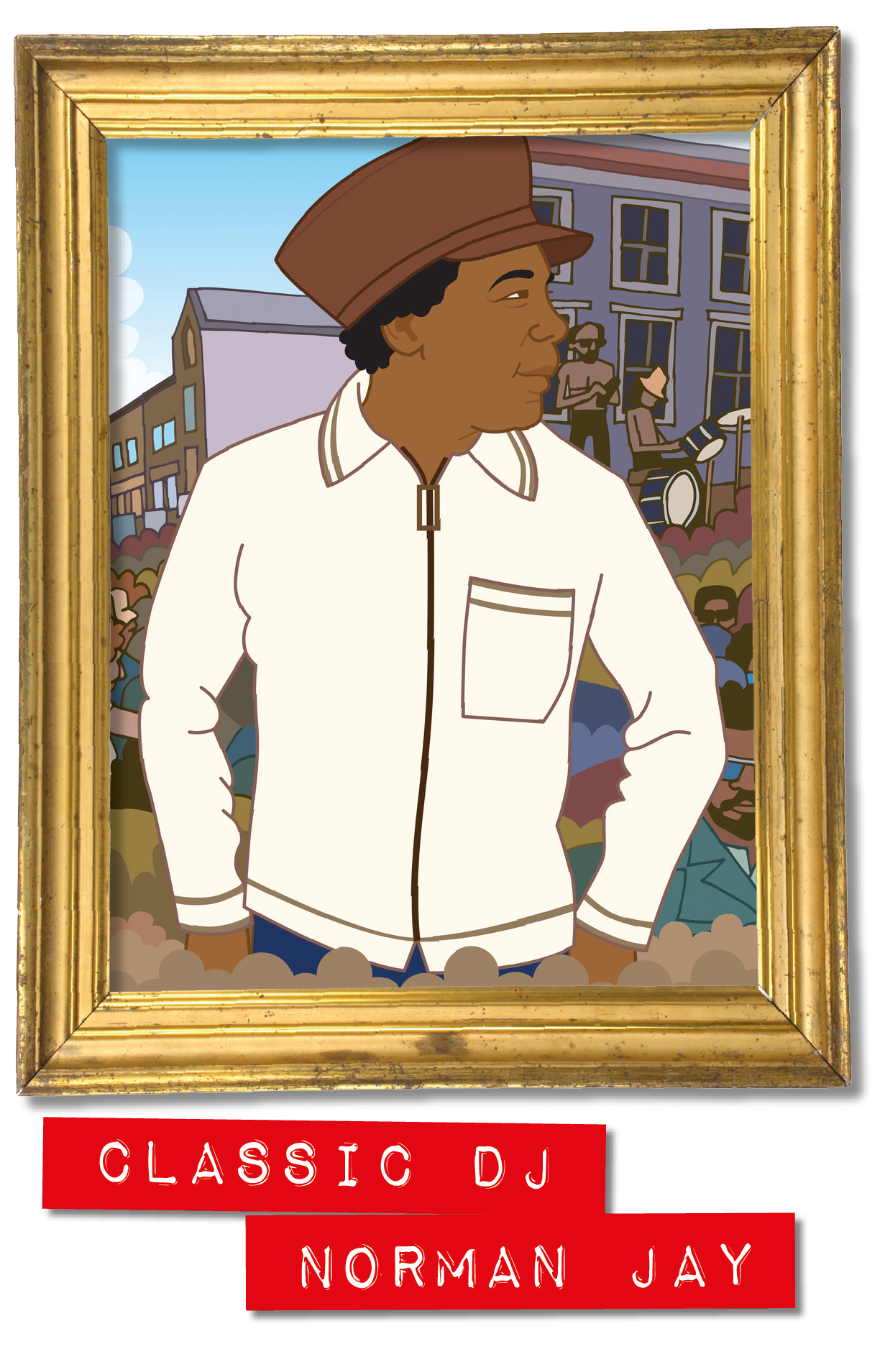 Born into a Notting Hill-based Caribbean family in 1957, Norman Jay (aka Norman Joseph) was reared on his father’s ska, bluebeat, reggae, R&B, soul, funk and jazz records, finding his own teenage passion in the proto-disco sound epitomised by the Philadelphia International label.

Staying with family in Brooklyn on various occasions enabled him to soak in NYC’s era-defining disco scene at its height and the subsequent detonation of the hip-hop explosion, frequenting now-classic clubs and witnessing/meeting some legendary DJs. He’d make his ‘block party’ debut there alongside his uncle, a DJ/sound system owner.

Energised by his New York experiences, he built the ‘Good Times Sound System’ with brother Joey - the aim to appear at Notting Hill Carnival. Playing funk, soul and disco to a largely reggae audience, the response was initially hostile, but the good vibes groove won through, Jay becoming a carnival staple, his name synonymous with the weekend, leading to acknowledgement from the British establishment in awarding him an MBE for his services to music in 2002.

London’s mid-‘80s rare groove scene emerged from the illegal warehouse party scene (its best-known space Earl Court’s Dirtbox) where DJs like Jay Strongman and Chris Sullivan, who’d subsequently run The Wag club, built their reputation. Norman Jay would thrive in this environment, deriving a position of influence, enhanced by his new status as presenter and shareholder at game-changing pirate station Kiss FM, inspired by its seminal New York namesake, which galvanized a new generation of London DJs, including, like Jay, a number of black DJs, previously marginalized, but now very much exerting their influence.

Rare groove focused on ‘70s funk, which was being widely sampled and looped as a hip hop essential in the US, whilst boogie, a retrospective London-named category, drew from the underground disco-funk of the late-‘70s/early-‘80s. It was very much a London movement, it’s illicit spaces primed for the oncoming acid-house era - the trajectory in the North and Midlands saw electro leading directly to house, rare groove not taking root.

As the ‘80s drew to a close, Polygram Records would bring in Jay alongside Gilles Peterson to run the Talkin’ Loud label, whilst in 1990 Kiss FM went legal, Jay hosting its inaugural show. The success continued via his more house-geared High On Hope club nights, whilst Jay became increasingly in demand internationally, continuing to DJ to this day at parties throughout the globe. 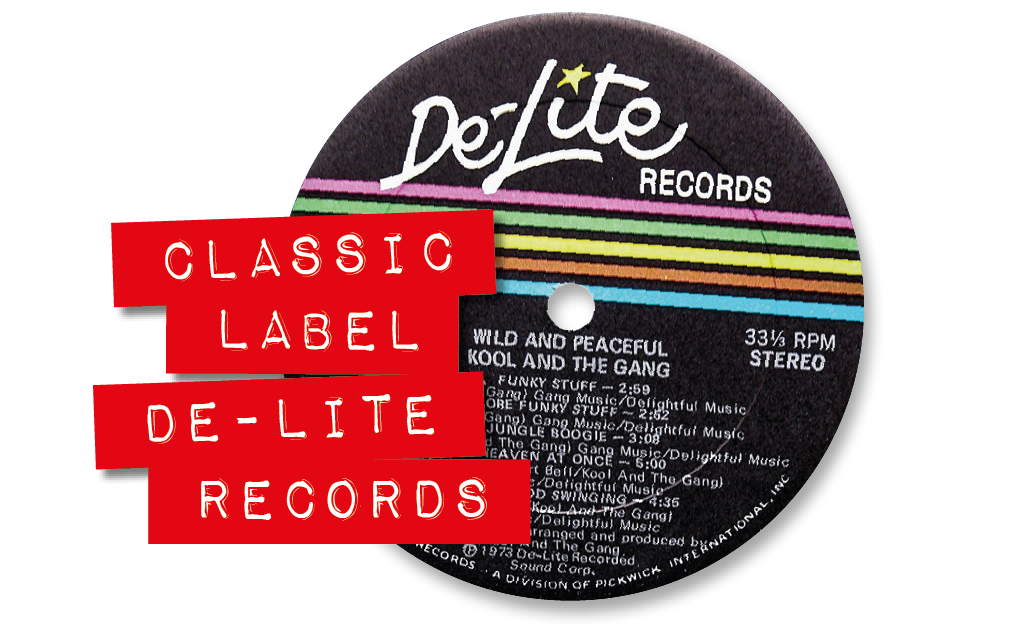 Acknowledged amongst the great ‘70s funk groups, before taking a decidedly more commercial turn in the ‘80s, Kool & The Gang were the mainstay of De-Lite for the next decade and a half.

Their big breakthrough arrived in 1973 via their album ‘Wild And Peaceful’ with its three singles, ‘Funky Stuff’, a US top 30 entry that opened the doors for million-selling top 10 hits, ‘Jungle Boogie’ and ‘Hollywood Swinging’, the latter giving them their first of nine US R&B #1s.

Kool & The Gang dominated De-Lite’s release schedule, further mid-‘70s highlights including ‘Higher Plane’, ‘Spirit Of The Boogie’ and ‘Summer Madness’. With the rise of disco they moved away from their trademark downbeat funk groove, striking with ‘Open Sesame’ (1976), and scoring a top 20 US Disco hit that subsequently featured on the multi-million-selling ‘Saturday Night Fever’ movie soundtrack 12 months on. However, they’d struggle to remain relevant until just before the end of the decade, when their Eumir Deodato produced single ‘Ladies Night’ stormed the charts, placing US R&B #1, US Disco top 5 and US & UK top 10.

The label’s other main act was Crown Heights Affair, named after a neighbourhood in their native Brooklyn. 1975’s ‘Dreaming A Dream’ topped the US Disco chart, whilst ‘Every Beat Of My Heart’ and ‘Dancin’’ swiftly followed it into the US Disco top 10. Despite being largely ignored Stateside, the UK clubs were particularly enamoured with 3 tracks from their 1978 ‘Dream World’ LP - ‘Galaxy Of Love’, a top 30 hit, ‘Say A Prayer For Two’ and ‘I’m Gonna Love You Forever’. 1979’s ‘Dance Lady Dance’ had minor success before ‘You Gave Me Love’ (1980) became a UK top 10 hit, which also reached #12 on the US Disco chart.

Coffee’s ‘Casanova’ was a huge 1980 UK club favourite, reaching #13 on the British chart, despite failing to make any impact in the US.

1980-1985 would be Kool & The Gang’s most lucrative period, with half-a-dozen million-sellers chalked-up, including De-Lite’s only US #1, ‘Celebrate’, which, along with 1985’s ‘Fresh’, would top the US Disco chart. However, 1982’s ‘Get Down On It’ excepted, their final hits were viewed as insipid commercial throwaways by those who lovingly remembered their illustrious funk past. 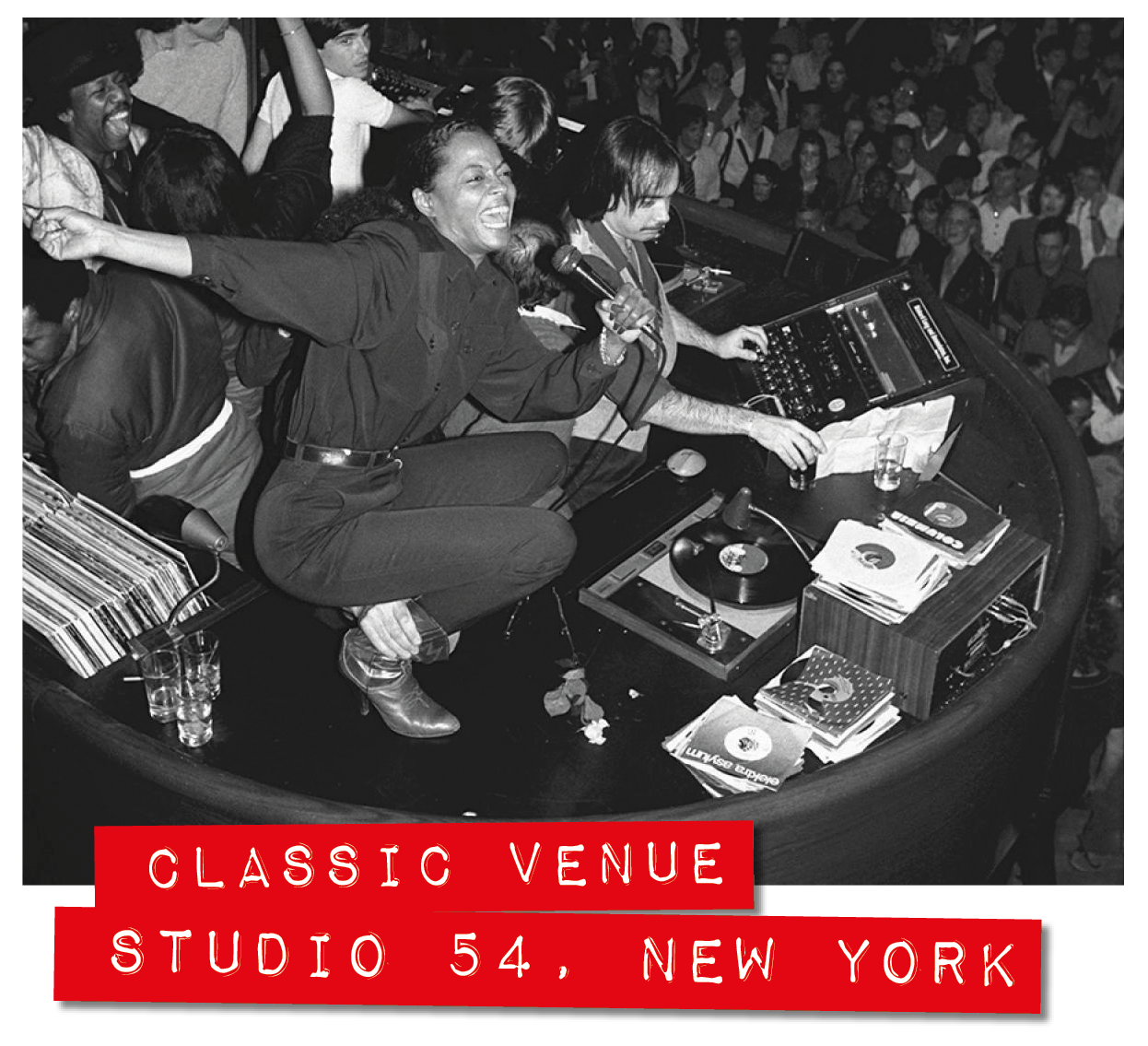 There’s no discotheque more legendary than New York’s Studio 54. It was the world’s most popular celebrity haunt, with countless tales and legends surrounding the venue’s unrestrained hedonism, glamour and excess.

Originally constructed in 1927 by renowned architect Eugene De Rosa as Manhattan’s Gallo Opera House, the building would later serve as a radio/TV studio for CBS before entrepreneurs Steve Rubell and Ian Schrager transformed it into a lavish nightclub. With Jack Dushey’s financial backing, they funnelled $400,000 into its interior design, lighting/effects and Richard Long installed sound system.

An air of notoriety was immediately created following its April ’77 opening, with masses of revellers refused entry to the club - Rubell’s ruthlessly selective door policy doing much to fuel Studio 54’s popularity, with those knocked-back all the more eager to get in next time. Once inside the atmosphere was less judgemental – Andy Warhol once remarked that it’s “a dictatorship at the door and a democracy on the dance floor”.

Its popularity soared following Bianca Jagger’s birthday, when a live horse was brought into the club – the resulting photos of Mick’s wife atop a white stallion spread globally, the club subsequently becoming the world’s best-known nightspot.

The stories are endless… not least the one when Chic’s Nile Rodgers and Bernard Edwards were turned away from the 1977 New Year’s Eve party, channelling their drunken frustration into writing megahit ‘Le Freak’ (its title substituted for the original ‘aaahh fuck off’ chant).

The club enabled people to completely lose their inhibitions and indulge their wildest desires, with open drug taking and a highly sexualised dancefloor, plus extreme debauchery in the secluded basement corners or up on the balcony.

Such decadence couldn’t go on indefinitely and things came to an end for Rubell and Schrager after 33 months of intense pleasure seeking and profit-skimming, when they were jailed for tax evasion in 1980. The final party they threw was billed ‘The End Of Modern-Day Gomorrah’, with special guest Diana Ross.

The club re-opened under new management in 1981 and would operate until ‘88, with DJ Kenny Carpenter rising to prominence following the re-launch. However, its halcyon days were well behind it, the second phase much dampened down in comparison to its late ‘70s infamy. 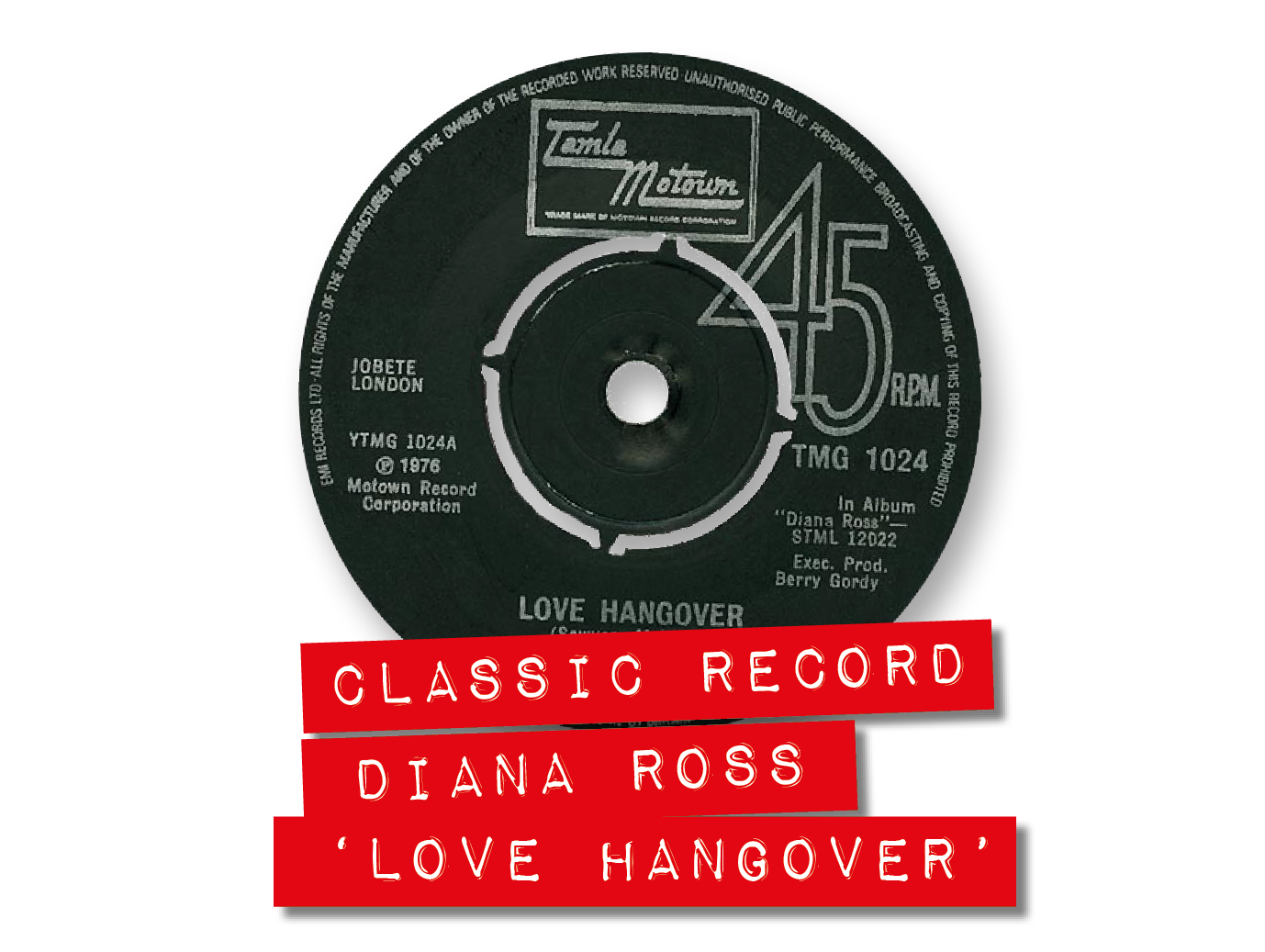 Former Supreme, Diana Ross had already gained diva status well before the arrival of disco. Her stock in trade was the big dramatic ballad, but in 1976 she’d deliver ‘Love Hangover’, a record that hooked-in her core, now mature, audience, whilst also becoming one of the year’s hottest club tracks - a three-time US chart topper (Pop, R&B, Disco).

The trick was a two-pronged approach, a slow and brooding opening section before the track burst into its irresistible dance groove for the rest of the journey, expertly set-off by the singer’s wistful performance. This type of arrangement would act as a successful template for some of disco queen Donna Summer’s subsequent hits.

Although Motown was still the premier soul label, issuing its greatest albums during the early-mid ‘70s, most notably by Marvin Gaye and Stevie Wonder, Philadelphia International was the new kid on the block – far more embroiled in the emerging disco culture and very much setting the dancefloor standards.

Before ‘Love Hangover’, Motown had hardly set the disco chart alight – granted they’d had a disco #1 with the final Jackson 5 single, ‘Forever Came Today’, but just a few months earlier the dance-geared ‘Love Machine’ by The Miracles topped the pop chart, but barely scraped into the disco top 20.

Motown certainly played its part – ex-Temptation Eddie Kendricks’ ‘Girl You Need A Change Of Mind’ (1972) is acknowledged by many as one of disco’s foundation tracks, it’s co-producer, Frank Wilson, the protégé of the great Norman Whitfield, producer of Kendricks when a Temptation, whose experimental style had a huge influence on the upcoming disco direction.

Ross would be unable to build-upon this new-found disco stature until three years on, when her 1979 Ashford & Simpson produced album, ‘The Boss’ topped the Disco chart. Her dancefloor credentials re-affirmed via the following year’s ‘Diana’ LP, produced by Chic’s Rodgers & Edwards - ‘Upside Down’ returning her to the summit of the US chart.

Ross was one of the celebrities oft spotted at exclusive Manhattan club Studio 54, and was memorably photographed perched atop the DJ booth at the venue’s closing party when the club’s original owners were jailed for tax evasion.

Because of Ross’s pre-existing ‘60s icon status, her role at the top table of disco divas, alongside the likes of Gloria Gaynor, Donna Summer and Grace Jones, plus Salsoul’s Loleatta Holloway and Jocelyn Brown (Inner Life), is often overlooked, but ‘Love Hangover’ and later club successes cast her as a leading figure.

Motown would re-assert itself as a dance label to be reckoned with during the next year, with significant successes for Stevie Wonder, The Originals, Thelma Houston and Marvin Gaye.