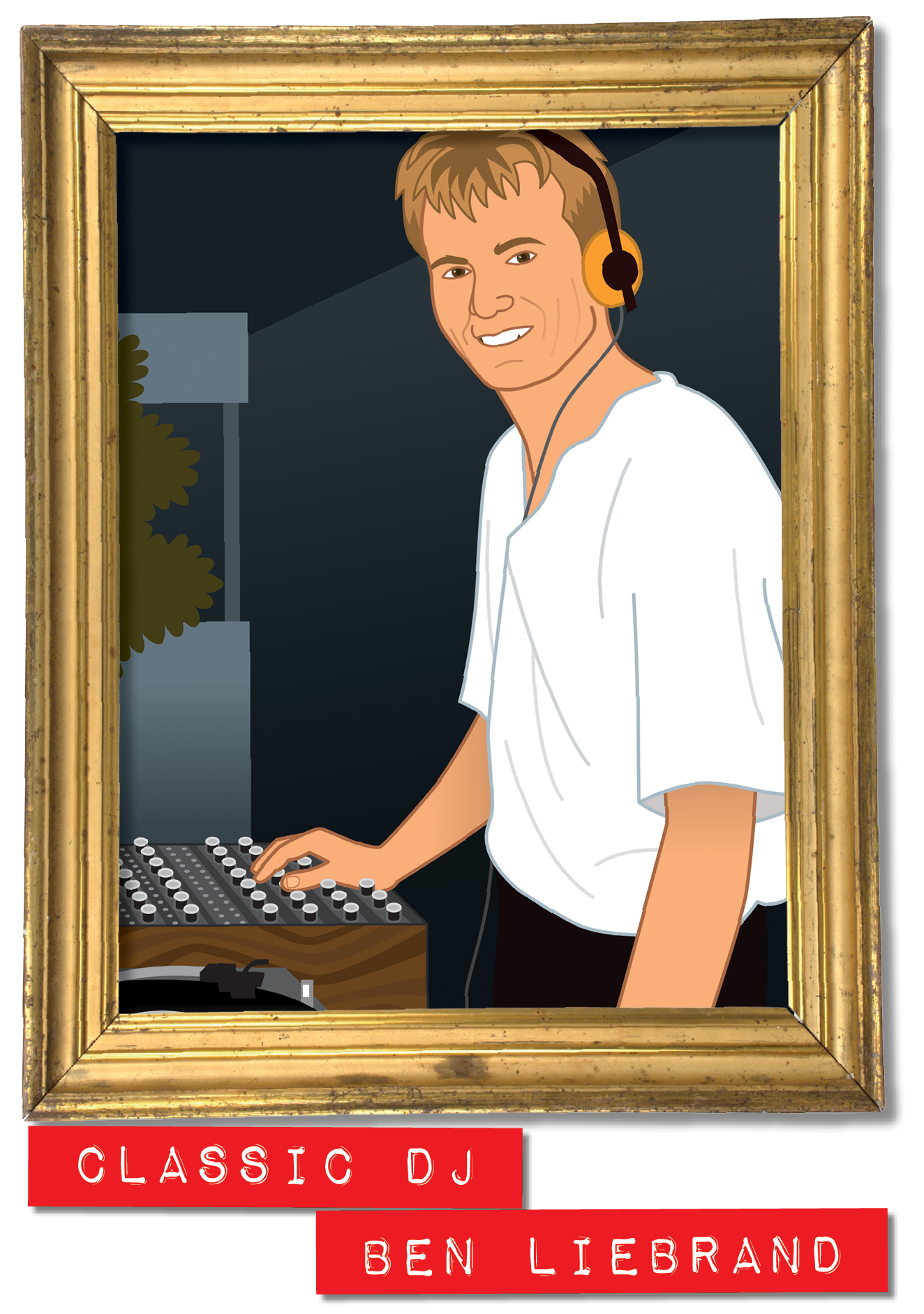 Ben Liebrand is viewed as the Godfather of Dutch dance culture, cited by Armin van Buuren, Ferry Corsten, Olav Basoski and Tiësto, as a formative influence. He introduced a plethora of new electronic music and the concept of non-stop mixing to the Dutch airwaves.

Born in Nijmegen, the Netherlands, in 1960, Liebrand was playing parties with his mobile disco aged 16. In 1978 he started out as resident at local club Juicy Lucy, before moving to The Kwien in ‘79, where he witnessed fellow-DJ Huib Luiten mix records together, setting his career course - Luiten himself having seen DJs mixing whilst in the US the previous year.

Liebrand embarked on his longest residency in December 1980, an 8-year association with newly-opened Nijmegen gay venue The Keizer Karel, but it was on the radio that he really made his mark, starting the weekly hour-long ‘In The Mix’, for Radio Veronica. It was the first non-stop mix show broadcast nationwide.

New York disco culture was embraced by the Dutch, with the Rams Horn label licencing numerous tracks from NYC companies between 1979-85, including Prelude, Salsoul and “O” Records, as well as Canadian disco imprint Matra. Many of these tracks turned up in Liebrand’s mixes.

The ‘Grandmix’ series was launched at the end of ’83, consisting of 100 of the year’s most popular club tracks. ‘Grandmix’ would run on Radio Veronica until 1992, becoming a Dutch institution that informed a whole generation of DJs.

In 1984, Liebrand also began creating shorter ‘minimixes’ that contained no more than four tracks and acted as a platform for his own edits/remixes. He’d often merge the original with a dub/instrumental version to create his own unique take. His mixes of Bill Withers’ ‘Lovely Day’ and Frankie Valli & The Four Seasons’ ‘December 1963 (Oh, What a Night)’ were initially premiered in this way on Radio Veronica.

His final ‘Grandmix’ was in 1992, Liebrand deciding to take a hiatus due to frustration at the lack of feedback he felt his work was receiving after spending much of the previous month laboriously putting the mix together, although he would return to the station later down the line, in 2004, following the launch of his long-running ‘Grand 12 Inches’ CD compilation series, which documents the music he played in the clubs and on the radio. 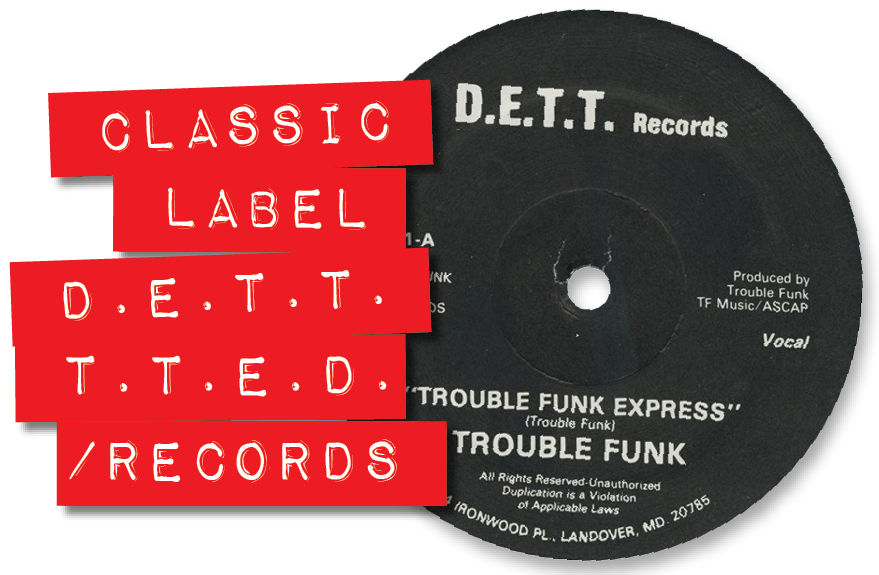 Known as ‘go-go’, Washington D.C.’s own brand of funk began to develop as the ‘60s moved into the ‘70s, carving its own distinct percussive groove. The fully-formed go-go sound arriving around the same time the first hip-hop records were surfacing in New York.

Although it grew organically from a scene with many bands, Chuck Brown is credited as go-go’s seminal artist, given his overall contribution to its evolution. However, many groups, including The Young Senators, Black Heat, Aggression, The Mixed Breed, 95th Congress, BlackStone, 2000 A.D. and Symba all played their part in its development.

In the ‘70s, classic funk releases including Sir Joe Quarterman’s ‘(I Got) So Much Trouble In My Mind’ (1972) and ‘Shack Up’ by Banbarra (1975) came out of the D.C. studio Track Recorders, whilst Parliament’s 1975 LP ‘Chocolate City’ offered tribute to the US capital, where Parliament/Funkadelic had been particularly popular during their gradual rise to the top of the funk pyramid – the title referring to D.C.’s black majority population.

The term ‘going to a go-go’, popularised by The Miracles’ million-selling mid-‘60s hit, was adapted to this emerging groove, Chuck Brown and his band The Soul Searchers setting the agenda with R&B hits ‘We The People’ (1972) and ‘Blow Your Whistle’ (1974). Black Heat’s ‘No Time To Burn’ marked another key moment in go-go’s unfolding.

It was the 1979 Chuck Brown & The Soul Searchers R&B chart-topper ‘Bustin’ Loose’ that really blew things open, with the burgeoning D.C. band Trouble Funk taking up the baton via early recordings on a variety of labels, including go-go’s breakout album 1982’s ‘Drop The Bomb’ for Sugar Hill, including the anthem ‘Hey Fellas’.

This led Trouble Funk to launching their own cult-underground label, D.E.T.T. Records, denoting the members of the band – Dyke, Edwards, Taylor and Tony. They’d release a number of their own singles including ‘Trouble Funk Express’ (1982) and ‘Say What?’ (1983), as well as their 1983 album, ‘In Times Of Trouble’.

D.E.T.T. would also issue Trouble Funk produced records by acts including Slim, The Go-Go Allstarz and Hot, Cold Sweat as well as Arkade Funk, whose ‘Search And Destroy’ and ‘Tilt’ were choice electro cuts. The sister label T.T.E.D. began releasing music in 1983, acting as a vessel for go-go’s most coveted producer Max Kidd, who had previously produced The Soul Searchers’ timeless ‘Blow Your Whistle’. Go-go’s most famous son, Chuck Brown, Soul Searchers in tow, provided the label with their best-known release, club favourite ‘We Need Some Money’ (1984).

Although the genre would fade as the ‘80s progressed, it would subsequently be much sampled by the hip-hop generation. 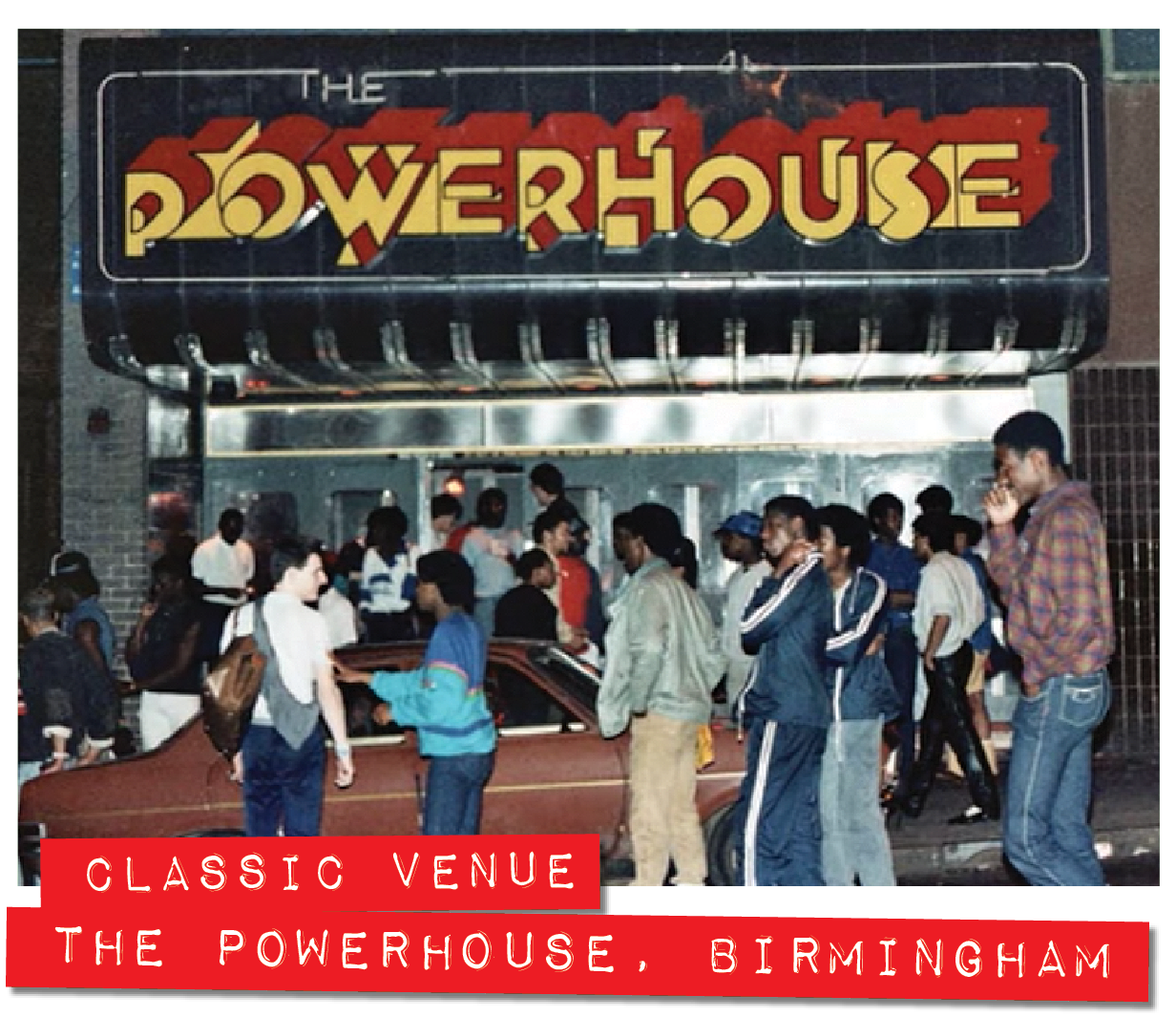 Birmingham, Britain’s second largest city, was a dance music hotbed during the ‘70s and through into the ‘80s, taking in Northern soul, jazz-funk and electro.

Whilst Northern soul devotees were predominantly black music loving white kids, jazz-funk and electro-funk saw a greater, often majority, black presence. The best dancers were generally black, and these were very much scenes where dancing mattered – to find the cutting-edge you had to know where the black crowd went.

Evolving from the all-nighter, a key component of the mod and later Northern soul movements, all-day events, on Sundays/bank holidays, saw the region’s top DJs lined-up together, which served to connect a network of thriving black music scenes in cities like Manchester, Sheffield, Leeds, Nottingham, Stoke and Birmingham.

The Birmingham dancers were noted travellers, not thinking twice about driving 100 miles to attend their favourite clubs; London’s Electric Ballroom and my own nights at Wigan Pier and Manchester’s Legend included. Their geographical Midlands locale aiding a more cosmopolitan outlook - those living further North or South tending to stick closer to home.

Although the Mecca Leisure-owned Powerhouse generally courted a more commercial clientele, it importantly hosted a series of influential all-dayers, launched by promoter Kenny Khan, targeting a largely black audience demanding nothing less than the latest US imports. With Nottingham’s Rock City, The Powerhouse joined The Pier and Legend embracing New York’s electro flavours. Breakdancers would soon outnumber fusion fanatics, although the all-dayers retained a smaller jazz room for diehard enthusiasts.

Previously The Locarno, a club with its own all-dayer legacy, the space was re-invented as The Powerhouse in 1982, receiving a state-of-the-art makeover, following in the footsteps of UK venues like The Warehouse in Leeds, Wigan Pier, Camden Palace and Legend - where Powerhouse resident, Ralph Randell, DJ’d previously - investing heavily in sound and lighting, lasers and hydraulics included. These gatherings at the 1,500 capacity club bridged the North/South divide, Paul ‘Trouble’ Anderson, Cleveland Anderson and Tim Westwood amongst those from the capital joining the likes of Jonathan, Trevor M, Steve Dennis and, of course, Colin Curtis - myself also included during its first year.

All-dayers all but disappeared with the rave explosion of the late-‘80s - a golden era in the history of the British black music scene coming to a close. 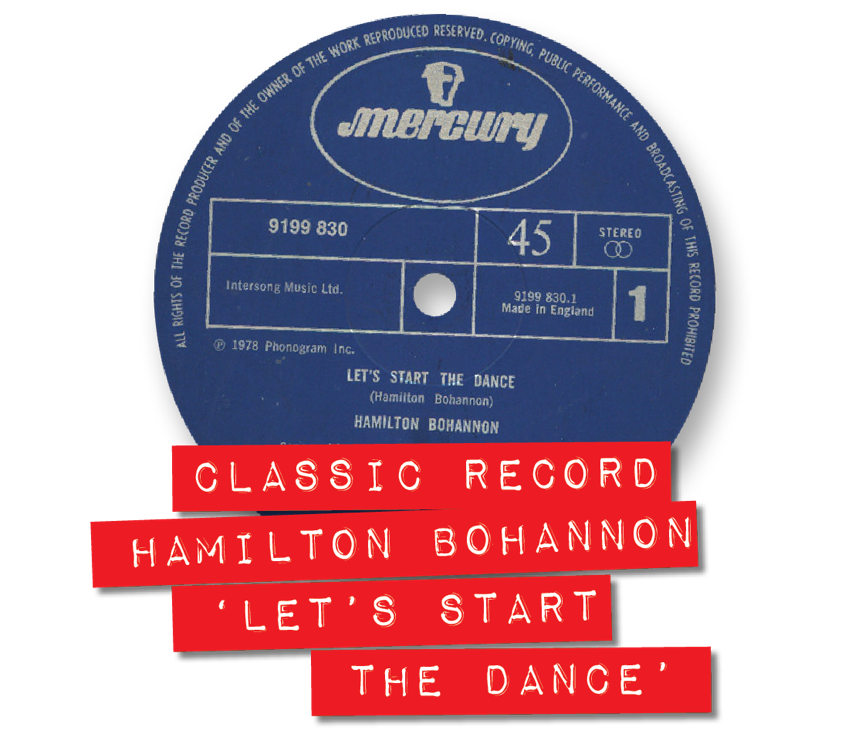 Hailing from Georgia, the same state as James Brown, Hamilton Bohannon, a formidable drummer, developed his own groove that informed disco, but with the funk sensibilities laid out by his predecessor. Born in 1942, he learned drums at school playing in a number of bands, including a brief stint with a young Jimi Hendrix whilst at college in Atlanta.

In 1964, he joined 13-year-old Stevie Wonder as tour drummer. He subsequently moved to Detroit in 1967, working as a live musician for the illustrious Motown Records. He formed his own touring unit, ‘Bohannon & The Motown Sound’ and backed some of the company’s hallowed acts - Marvin Gaye, The Temptations, Smokey Robinson, Diana Ross & The Supremes, and The Four Tops included.

When Motown set its sights on LA, Bohannon stayed in Detroit, putting his own band together and signing to New York’s Dakar label, releasing his debut album ‘Stop & Go’ in 1973, followed by ‘Keep On Dancin'’ (1974), which contained the single ‘South African Man’. It was his first chart success, although not in his home country, but over in the UK where it peaked at #22.

In 1975 he breached the UK top 10 with ‘Disco Stomp’, whilst debuting on the US Disco chart, climbing to #11. Later that year he finally penetrated the US R&B top 40, with ‘Foot Stompin’ Music’ scraping in at #39, whilst completing a hat-trick of UK top 30 hits. The track would also provide his highest US Disco position, reaching #3.

His lack of R&B chart success is surprising, his only top 10 entry his most celebrated recording, the Mercury released ‘Let’s Start The Dance’ (1978). He’d place a trio of tracks in the US Disco Top 20 between 1976-77 – ‘Bohannon’s Beat’, ‘Dance Your Ass Off’ and ‘Andrea’ - before releasing his defining track. Driven by the fiery vocal of former Motown artist Carolyn Crawford, ‘Let’s Start The Dance’ is a rhythmic force, pressing the groove into your body with all its might. Its modest chart placings, #9 R&B, #7 Disco, #56 UK is unreflective of its enduring popularity.

Signing to MCA Records in 1984, further success would be elusive with dance music taking an electronic direction. In 2017 a street in his hometown, Newnan, was named Bohannon Drive in his honour.