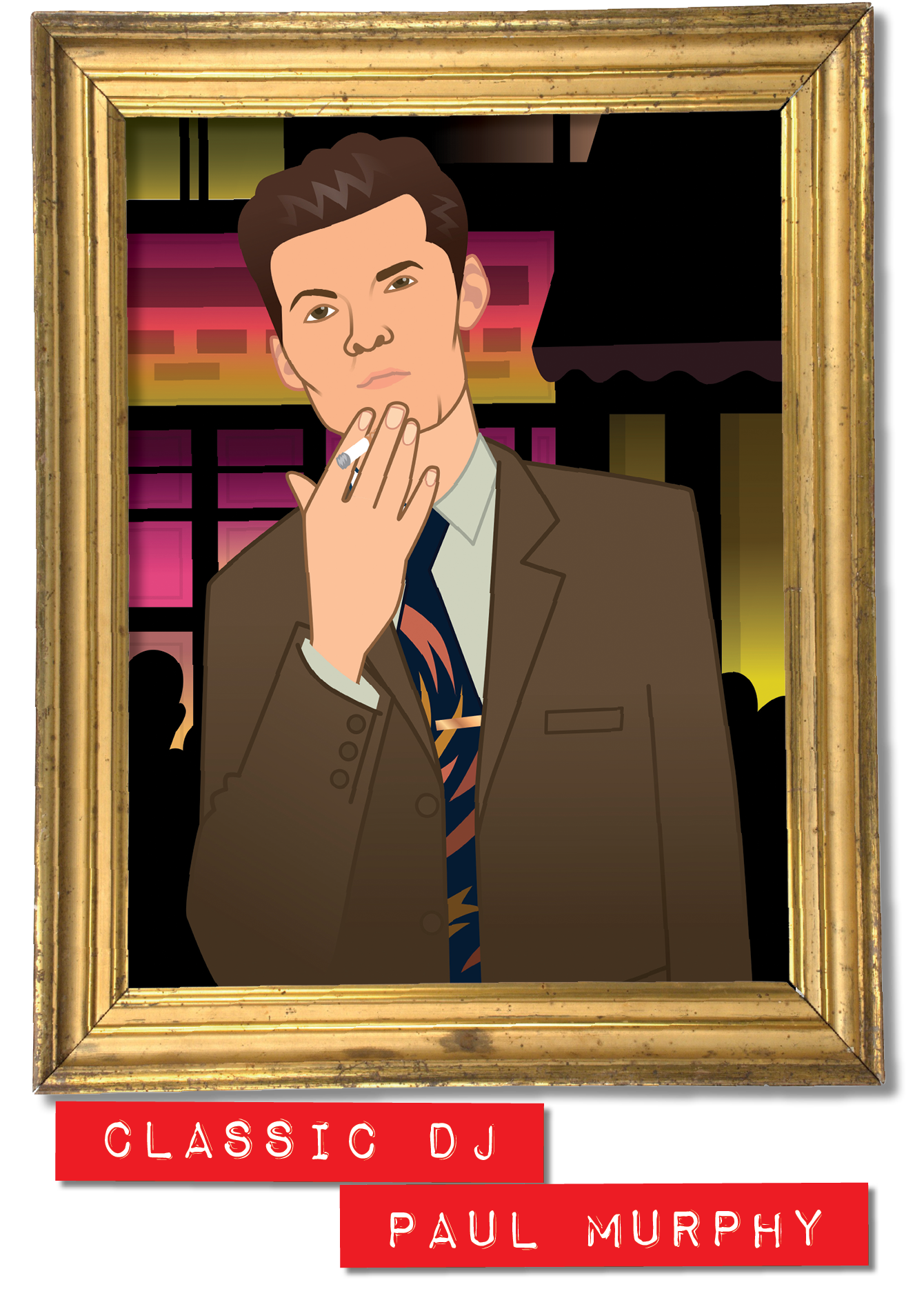 Jazz has played its part in British youth culture for the best part of a century. A new chapter commenced in UK discotheques during the mid-late ‘70s, specialist black music DJs beginning to play artists like Donald Byrd, Roy Ayers and Lonnie Liston Smith under the jazz-funk banner – these included Chris Hill, Bob Jones and George Power in the South and Colin Curtis and Graham Warr in the North/Midlands.

By the late ‘70s/early ‘80s, jazz-funk became the catch-all term for a cutting-edge black music scene, played alongside soul, funk and disco, mainly US imports. I’d takeover Wigan Pier’s Tuesday jazz-funk night in 1980, and even later, when I’d pursue an electro-funk direction, I’d still feature ‘jazz breaks’ on my nights.

Upping the ante, DJs began playing jazz of a purer variety, referred to as fusion - usually uptempo tracks that suited the dancers, often by South American musicians, adding a Latin flavour. ‘Jap-jazz’ was also in vogue - digitally mastered albums by both Japanese and international artists.

Paul Murphy emerged in this environment to take his place at the jazz dance vanguard. Starting out at Ilford’s Kingswood club in 1978, his breakthrough came a couple of years on, via The Horseshoe in central London. In his book ‘From Jazz-Funk & Fusion To Acid Jazz’, Mark ‘Snowboy’ Cotgrove stated; ‘from a Southern perspective…everything that happened historically – jazz wise – leads up to Murphy, and it was never the same after’.

Cultural maven Chris Sullivan, then running London’s WAG club, brought Murphy there in 1984, this time playing on Mondays to a fashionable, largely white audience, the music less frantic. He left in 1986, his departure marking the decline of the jazz dance scene for many. During the same period he ran his own jazz label, Paladin.

By the end of the ‘80s, disillusioned with the music business he moved to Ireland. He’d later return, most notably at Hoxton’s Blue Note in the ‘90s, brought in by Eddie Piller, the owner of the Acid Jazz label, which he’d helped inspire.

Unearthing a treasure trove of music, Murphy was a jazz evangelist, ever pushing at the boundaries. A major influence for subsequent jazz-based DJs, not least Gilles Peterson, who’d follow Murphy into the Electric Ballroom, as well as numerous musicians who either attended or were booked for his nights. 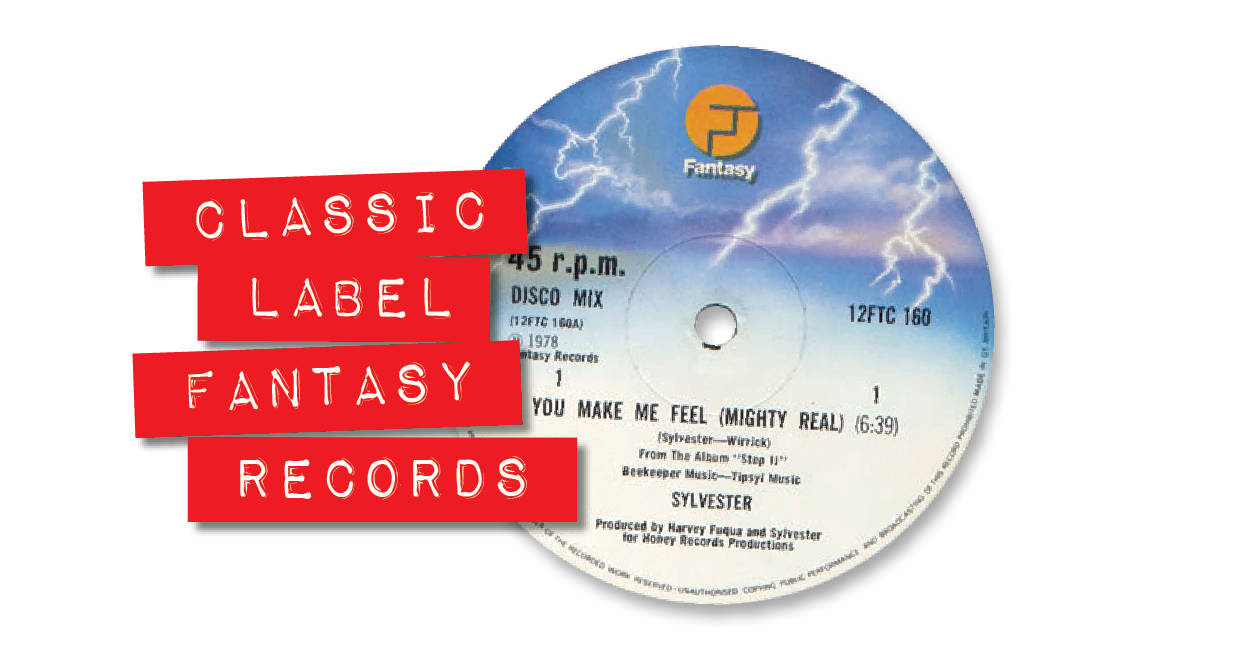 Founded in 1949 San Francisco by brothers Max and Sol Weiss, Fantasy was initially an outlet for jazz pianist Dave Brubeck, who thought he owned a share of the company and acted as A&R, bringing in other jazz artists, before discovering this wasn’t the case and quitting to sign for Columbia (where he cut his most famous recording, 1959’s ‘Take Five’).

Employee Saul Zaentze, with a group of investors, bought out the Weiss brothers in 1967. Major success followed with Californian rock band Creedence Clearwater Revival, who sold over 30 million records during the late ‘60s/early ‘70s – Fantasy’s Berkley headquarters, opened in 1971, nicknamed ‘The House That Creedence Built’.

They found success in the clubs via a young Washington DC group, The Blackbyrds (inspired by jazz trumpeter Donald Byrd, their tutor at Howard University). ‘Gut Level’ (1974) from their self-titled LP went top 10 Disco (the UK’s cut of choice being the downtempo funk workout ‘Do It Fluid’), prior to a huge pop hit in ’75 with ‘Walking In Rhythm’ (#6 US, #23 UK). ‘Happy Music’ and ‘Unfinished Business’ both made the Billboard Disco top 20, whilst ‘Rock Creek Park’, a favourite on the UK jazz-funk scene, was subsequently much sampled by a whole array of hip hop artists.

Other notable acts included Side Effect, Pleasure, Phil Hurtt and Idris Muhammad, whilst Fantasy’s late ‘70s/early ‘80s WMOT imprint was home to Fat Larry’s Band, Slick and Philly Cream, but their jewel in the disco crown was falsetto-voiced LA born Sylvester, a flamboyant gay performer brought to the label by Harvey Fuqua, a producer of Motown vintage and mentor to Marvin Gaye.

Sylvester’s first album provided his US Disco top 20 breakthrough with ‘Down Down Down’/‘Over And Over’ (1977). Its ’78 follow-up, ‘Step II’ included his defining release, ‘You Make Me Feel (Mighty Real)’, an enduring club classic, which, along with #19 pop hit ‘Dance (Disco Heat)’ topped the Disco chart. Sylvester would become one of disco’s most iconic artists, later recording for Patrick Cowley’s Megatone label, having left Fantasy in 1982. Both Sylvester and Cowley would succumb to AIDS during the ‘80s.

The label lost relevancy in the post-disco climate, although it can claim a crucial role in techno’s evolution, issuing the groundbreaking ‘Cosmic Cars’ (1982), ‘Clear’ (1983) and ‘Techno City’ (1984) by Detroit’s Cyboton (Richard Davis & Juan Atkins). 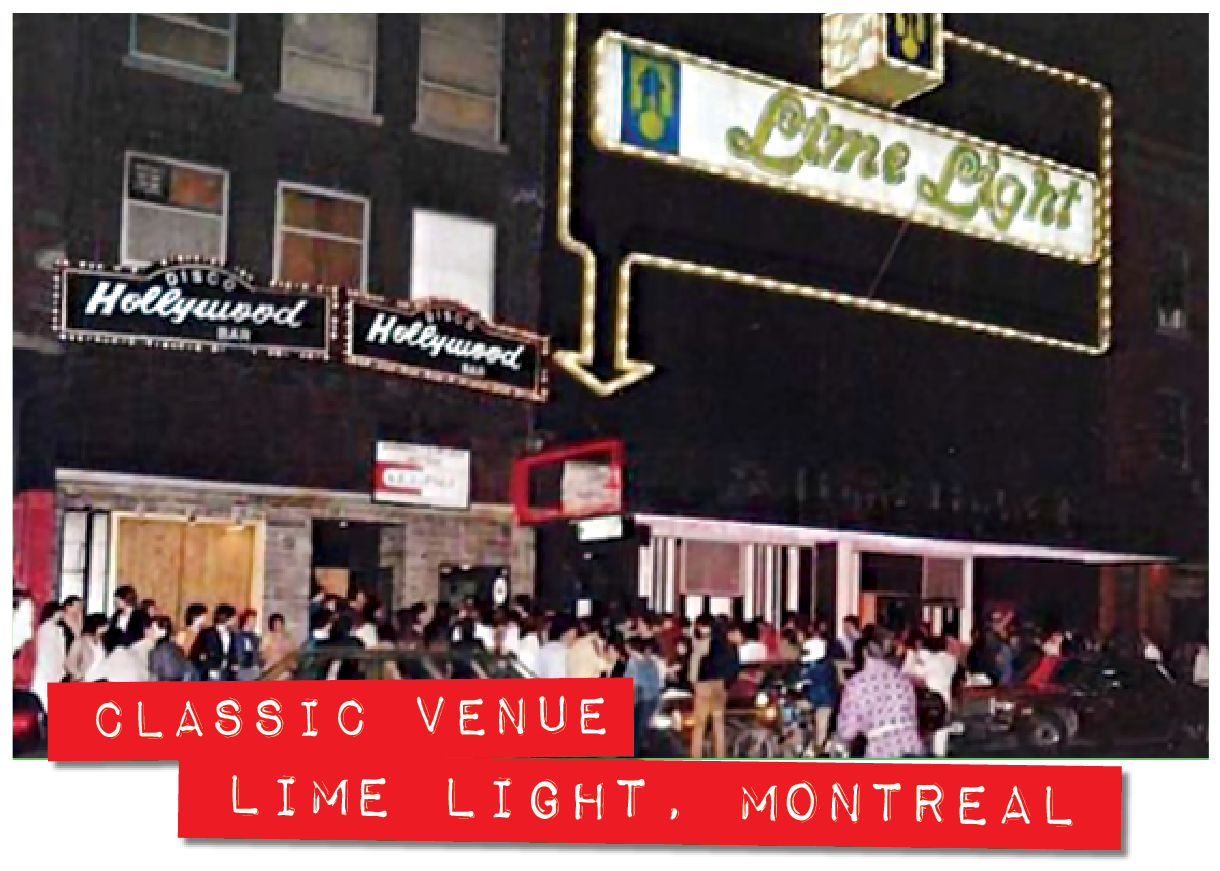 Launched in 1973 by Yvon Lafrance, who’d wanted to recreate what he’d experienced taking in New York’s nightlife; “a club that was at the forefront, based on emotion: the emotion of music, sound and lights” he once explained.

Since the ‘60s Montreal had boasted a wealth of nightclubs or boîtes à nuit (night boxes)/boîtes à go-go (go-go boxes) as they were referred to locally.Leasing two floors of a building on rue Stanley (he’d later acquire a third), Lafrance named his new venture after Charlie Chaplin’s 1952 movie ‘Limelight’.

Original resident George Cucuzzella matched records by tempo, his basic mixing techniques finessed by successor Robert Ouimet, who took over that same year, having started out at nearby Love.

Ouimet played nine-hour sessions to a diverse gay/straight and French/English-speaking audience, the club was open until 6am having obtained an after-hours license stipulating no alcohol from 3am. Apart from its impressive sound system, a big focus was placed on lighting - its inspired technician, Richard Joly, viewing the dancefloor as theatre.

The venue hosted live performances from major artists like James Brown, Gloria Gaynor, The Trammps and Grace Jones, whilst David Bowie, Iggy Pop and Kraftwerk all attended the club.

Soon regarded as the country’s leading DJ, Ouimet was the first to play live on radio in Canada, helped form the Canadian Record Pool, and championed the city’s PAJ Disco Mix crew’s trailblazing edits. He’d remix a number of Canadian recordings including Francine McGee’s cult-classic ‘Delirium’ (1978) and Lime’s US Disco #1 ‘Your Love (1981).

As the ‘disco sucks’ backlash swept up north of the border, Lime Light’s popularity waned. Having lost much of its crowd after Ouimet began to embrace post-punk/new wave, it closed in 1982.

In 2011 the club’s ‘70s heyday was fictionalized in the film ‘Funkytown’, the Lime Light depicted as Starlight. 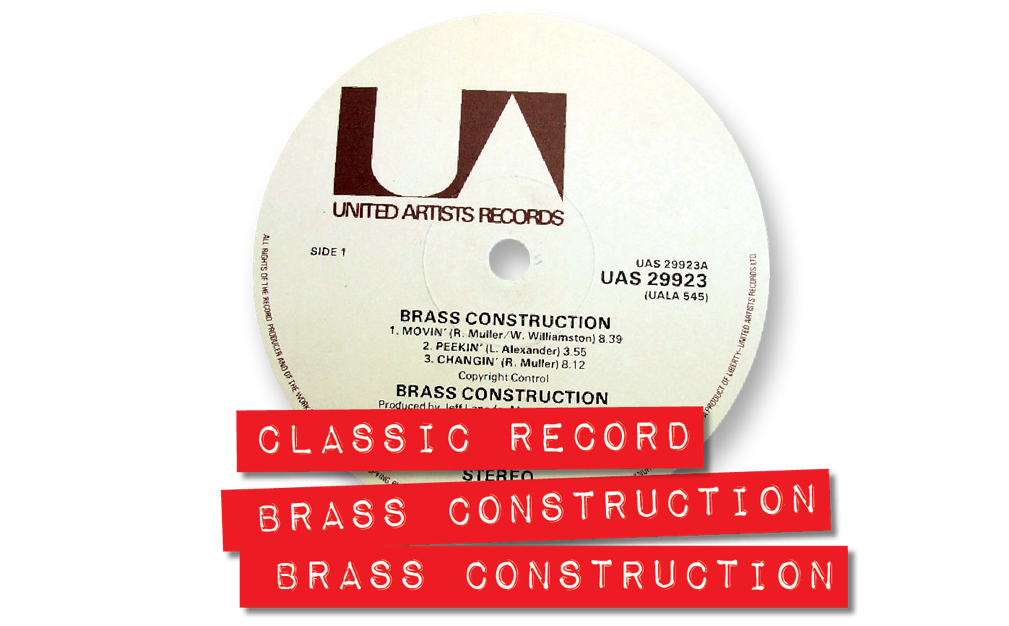 The band’s Guyana-born leader, keyboardist Randy Muller, had moved to Brooklyn to live with his grandmother in 1964. He’d developed a love of brass arrangements via the band he’d put together at school. The Dynamic Souls, the first group he recorded with, were born of this, and Brass Construction born of the Dynamic Souls.

Two of the tracks Muller was involved with, ‘Do It ('Til You're Satisfied)’ and ‘Express’ would go on to become top 5 hits in the UK, not to mention huge club favourites. Muller felt he was ’a horn guy basically writing horn parts for strings’, because he didn’t know any better, but his work was a revelation.

Still at college studying music theory, the teenage musician would also pick up degrees in arranging and social science, whilst mapping out the next steps for Brass Construction.

Following B.T. Express’ success, Lane approached United Artists, who signed Brass Construction, releasing the self-titled album to much fanfare. Picking up a Grammy nomination, it would go platinum in the US and make the UK top 10, whilst the first single, ‘Movin’’ reached #14 in the US, topped Billboard’s Disco chart and made it to #23 in the UK, largely due to club support. Its follow-up, ‘Changin’’, another huge club cut, was a #3 Disco hit.

Described in Blues & Soul on its British release as ‘perfection’ - the magazine hailing it as ‘the funk album of all-time!’ - it was a hugely influential recording, a real funk landmark, which would inspire countless black musicians, including the coming wave of Brit funk bands like Hi-Tension and Light Of The World.

Brass Construction’s decade-long recording career spanned 10 albums, but the first remains their defining work. Muller also had a hand in a number of club favourites by other artists, including Garnett Mimms & Truckin’ Company, Charles Earland, Tamiko Jones and Rafael Cameron, as well as Skyy, a group he was instrumental in forming, co-writing/co-producing 10 albums for them between 1979-1992.