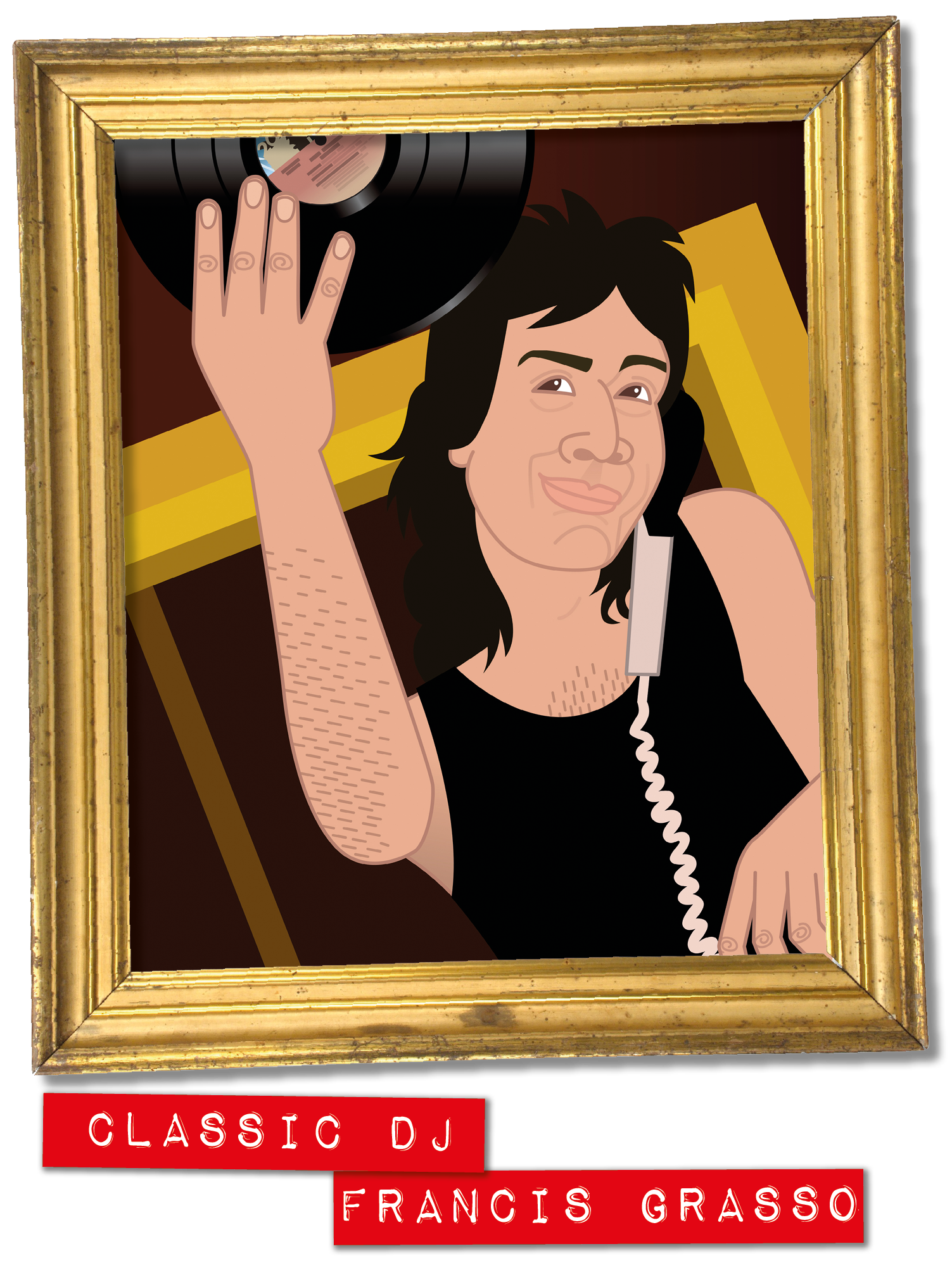 Francis Grasso was a New York innovator, a pioneer of mixing who revolutionized the role of the DJ. He secured his first residency at Salvation II in 1968, replacing Terry Noël, NYC’s leading DJ of the ‘60s, when he failed to turn up one night. It was a short-lived stay - the club soon forced to close, due to financial irregularities.

It would be at Sanctuary, located in an old German Baptist church, with the DJ positioned at the altar, where he built his legend, arriving in autumn ‘69 when the club still catered for a straight clientele, before new owners transformed it into ‘the first totally uninhibited gay discotheque in America’ the following year. Sanctuary features in the 1971 movie ‘Klute’, a crime-thriller starring Jane Fonda and Donald Sutherland, with other DJs who worked there including Steve D’Aquisto and Michael Capello. The vibe was suitably hedonistic.

This was in the slipstream of Manhattan’s Stonewall Inn riot in June 1969, following a police raid on the venue, which was a popular gay meeting place - the only New York bar where homosexuals were allowed to dance together. Police harassment was a regular occurrence, with drag queens particularly vulnerable for arrest, but this time the patrons fought back, sparking a series of confrontations between police and the gay community. Stonewall became a rallying point for Gay Liberation and New York’s queer subculture would thrive as a consequence.

Grasso broke the DJ mold, slotting together a diverse selection centered around the soul and funk of the period, but including rock tracks where appropriate, and even exotic curios like Olatunji’s ‘Drums Of Passion’ album, a 1959 Nigerian recording including ‘Jin-Go-Lo-Ba’, later covered as ‘Jingo’ in 1969 by Santana, a decade prior to Candido’s classic disco version.

His blending between records set him apart, and he’s acknowledged as the inventor of slip-cueing in a club environment (this was a technique previously utilized on radio) and later beat-matching – running 2 records together, the beats in sync, not an easy task at the time given that he was mixing records with live drums as opposed drum machine beats, whilst using Thorens turntables in these pre-Technics days.

Following the 1972 closure of Sanctuary, the originator gradually lost his footing at the vanguard of this newly emerging movement, finding himself outpaced by a new wave of NY DJs, and relegated to a minor role during disco’s heights, when the beneficiaries of his visionary approach stepped to the fore.

Prior to his 2001 death, his legacy was discussed in an interview he did for the New York disco documentary film ‘Maestro’. 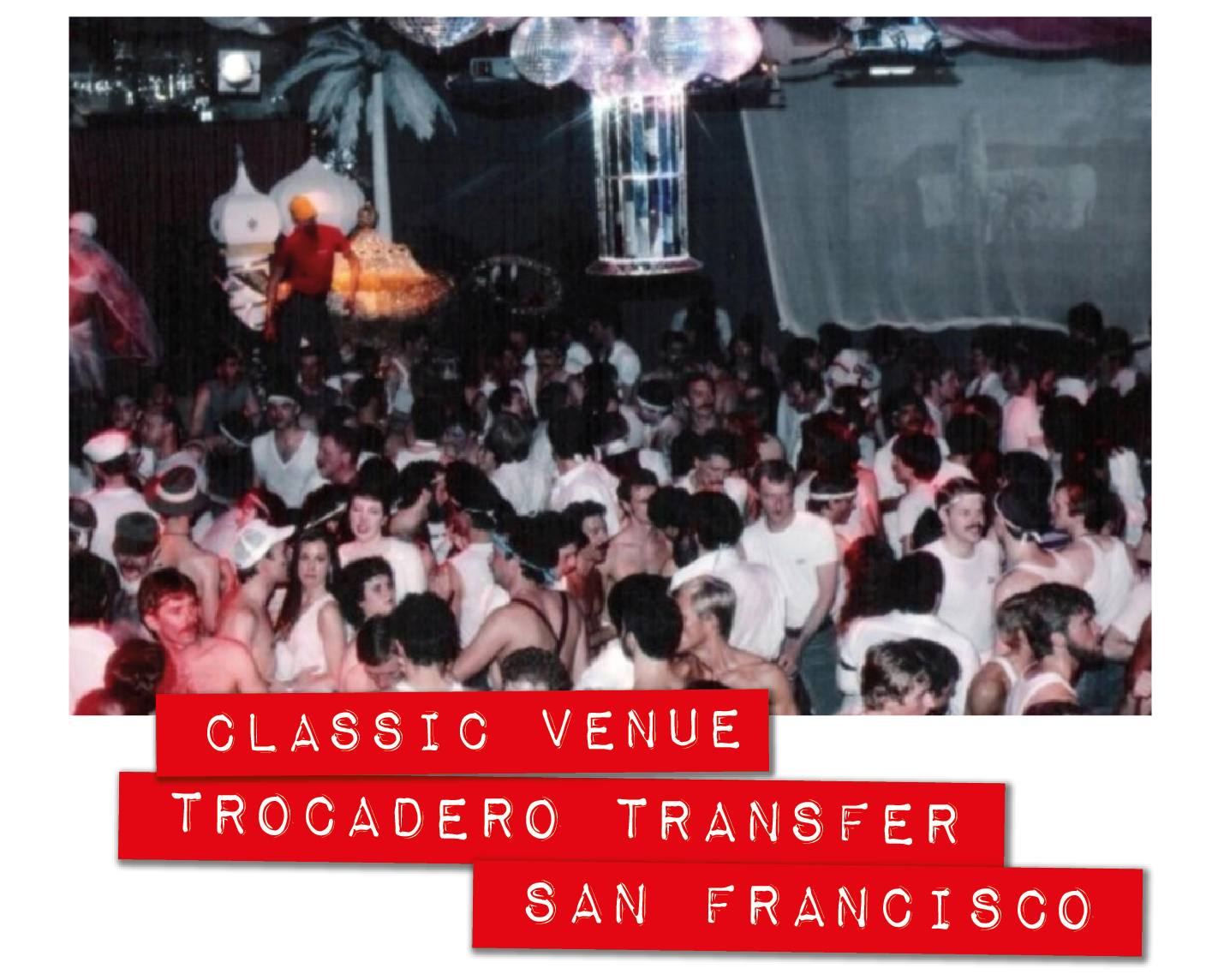 Whilst New York was undeniably the epicenter of club culture throughout the disco era, the West Coast played a strong supporting role via its artists, labels and venues, not least San Francisco’s Trocadero Transfer, located in the city’s SoMa neighborhood.

Owner Dick Collier wanted to fuse the technical prowess of New York’s approach to sound and lighting with the Paris grandeur of the Palais Du Trocadéro concert hall. Opening in December 1977 in an old TV studio, Collier drafted in NY DJ and sound designer Barry Lederer to install a similar Graebar system to that at 12 West, then one of the Big Apple’s leading gay clubs.

Saturday night became a ritual – the night starting out at Haight-Ashbury club I-Beam before the crowd headed to The Troc, as it came to be known, before ending up at The EndUp, which opened at 6am, taking the Saturday night party deep into Sunday.

Crucial to this was DJ Bobby Viteritti. Born on Long Island, New York, and influenced by Bob Lombardi and Roy Thode, Viteritti first made his mark in the gay clubs of Florida, where he’d re-located, in 1974. Impressed by an article he’d read about the newly opened Trocadero Transfer, he headed west and found himself offered the residency after Dick Collier got to hear one of his 8 track tape compilations, featuring a Donna Summer medley.

Whilst at peak time the club reflected the upbeat, often high-energy West Coast disco sound of the time, illustrated by artists like Donna Summer, Sylvester and Patrick Cowley, Viteritti was also renowned for his early morning ‘sleaze’ selections, bringing the tempo gradually down, guiding the dancers from +130bpm to -100bpm as the party entered its concluding phase.

The club’s state of the art light show was also a key feature and lighting operator, Billy Langenheim, was vital to the overall atmosphere. Viteritti had recruited him in LA, and between the two, they were said to be able to hold the audience in the palm of their hands.

Viteritti would be named Billboard magazine’s DJ of the year in both 1979 and 1980. The Bobby Viteritti era (1978-1981) would mark the golden era of The Trocadero, the club subsequently becoming increasingly commercialized. The AIDS epidemic almost lead to its closure later in the ‘80s, with attendances falling in San Francisco clubs. However, it would gain a new lease as an essential part the city’s underground house scene, which flourished in the ‘90s, and would make it through to the end of the decade before calling a day after almost a quarter century of clubbing at The Troc. 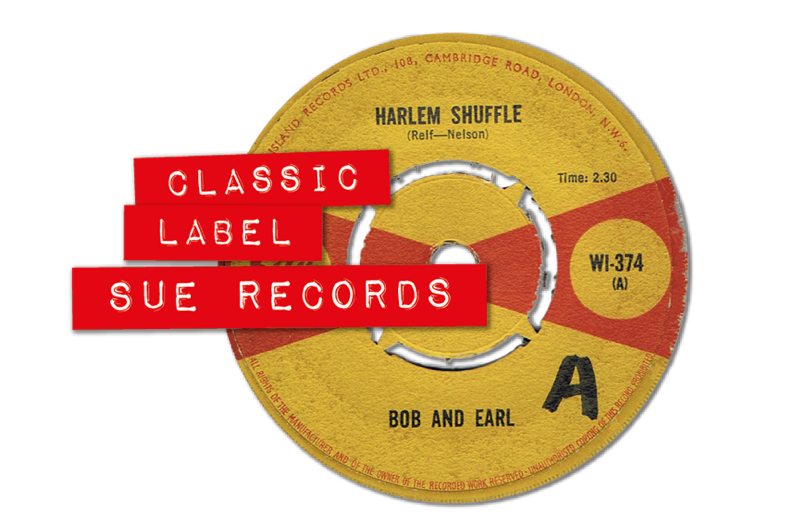 In 1957, Sue Records, a black-owned rhythm & blues label, was launched in New York by South Carolina born Henry ‘Juggy’ Murray Jr., who’d moved to the city as a youngster.

Murray, following business advice he’d received whilst sharing a flight with Leonard Chess - whose eponymous Chicago based label had been hugely influential throughout the ‘50s - set up Sue Records on the same 125th Street as rival and fellow Carolinian Bobby Robinson, owner of labels Red Robin, Fury and Fire Records (he’d later form Enjoy, which would play a key role in the emerging hip-hop movement during the late ‘70s/early ‘80s).

After a steady first few years, Sue really took off on signing Ike & Tina Turner in 1960, who during this association (ending in ‘64) made their US breakthrough. A key player in R&B’s early ‘60s transition into soul, Sue’s big successes including Ike & Tina’s ‘A Fool In Love’ and ‘It’s Gonna Work Out Fine’, ‘Mockingbird’ by Inez & Charlie Fox and Bob And Earl’s ‘Harlem Shuffle’.

From a British perspective, the label generates huge kudos, due to its connection with the Mod movement, which really gained momentum during the early ‘60s, rhythm & blues the music of choice. This led to Chris Blackwell’s Island Records licensing Sue in the UK, with Guy Stevens, the groundbreaking DJ from London’s leading Mod club, The Scene, overseeing the operation. Stevens, a DJ right at the very roots of UK club culture as we know it, imported US releases to play to an eager audience of R&B aficionados.

Back in the States, Sue tapped into the heart of Southern soul via Harold Battiste’s AFO (All For One) Records, making the New Orleans label a subsidiary. However, both internal and external pressures started to mount; the relationship with Island soured when they began to issue recordings from other labels on UK Sue, whilst Murray sullied his relationship with Battiste by poaching Barbara George (a young singer who’d scored a gold record with AFO.) having felt betrayed when they recorded Lee Dorsey’s ‘Ya Ya’ with rival Bobby Robinson. At the same time, the phenomenal success of Detroit’s Motown had consolidated the company’s dominance of the airwaves; meaning smaller black music labels were largely disregarded.

Beset by legal problems, over misjudged loans and copyright issues, Murray lost Sue plus publishing houses Saturn and Sagittarius to United Artists in 1968. Moving to California, he’d concentrate on production and a solo recording career, achieving a disco hit on both sides of the Atlantic with his mid-‘70s offering ‘Inside America’ (as Juggy Murray Jones). 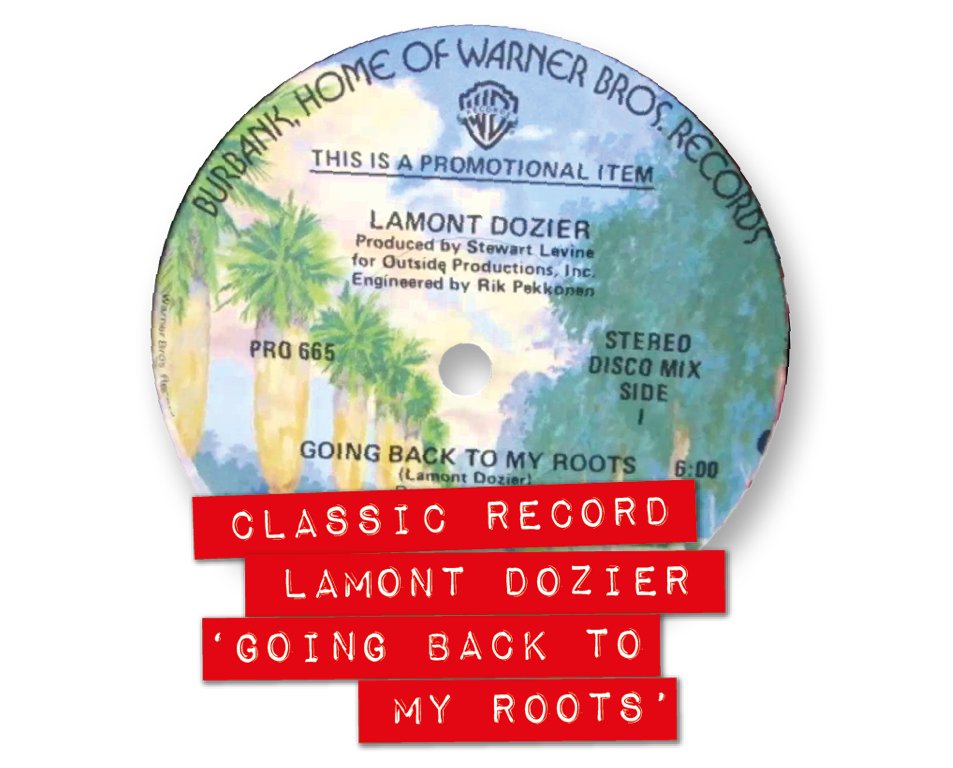 Lamont Dozier made his mark on the ‘60s as one third of Motown’s legendary Holland-Dozier-Holland songwriting/production team, scoring a sackful of hits for the company, including some of the decade’s most memorable 45s by artists including The Supremes, Four Tops, Marvin Gaye and Martha & The Vandellas, to name but a few.

Following a dispute with Motown head, Berry Gordy, they left the company and set up their own labels, Invictus and Hot Wax, in 1969, continuing their run of hits with tracks like Chairman Of The Board's 'Give Me Just A Little More Time' and 'Band Of Gold' by Freda Payne.

Having spent a decade recording as a duo with Brian Holland, Dozier struck out as a solo artist in 1973. His most famous song, 1977s 'Going Back To My Roots', was inspired by Alex Haley's Pulitzer Prize winning novel 'Roots: The Saga Of An American Family', first published in 1976, which, the following year, was adapted for TV, becoming a seminal mini-series. Presented as a history of Haley's family, dating back to Africa and the capture of his ancestor, Kunta Kinte, by slave traders in Gambia, it was a TV landmark. One of the most viewed programmes in US history, ‘Roots’ was perfectly attuned to the times, with black Americans, having come through the trials and tribulations of the civil rights era, feeling a greater sense of connectedness to their African heritage.

'Going Back To My Roots' would pick up DJ plays on both sides of the Atlantic, the full-length version perfectly suited to the then relatively new 12” format, the record becoming a firm favourite with UK black music specialists as well with DJs throughout the US.

In 1980, a cover version by Richie Havens would go massive on the British jazz-funk scene (although it's often mistakenly described as a Balearic 'discovery' from later in the decade). In 1981 WEA in the UK actually pressed up a limited DJ-only 12”, featuring both the Richie Havens and Lamont Dozier recordings. However, it's Odyssey's version, from 1981, that gave the song its most mainstream exposure, reaching number four on the UK chart.

In 1989 Italy's FPI Project would score big on the growing rave scene with their interpretation of the track, 'Rich In Paradise', and, following the addition of Sharon Dee Clarke's vocal, it was issued in the UK under the original title, making it to number 9 on the chart.

A new mini-series of ‘Roots’ was screened on American TV this year, 39 years on from its original appearance.