I can probably tell you a thousand stories about Rob Fernandez. From anecdotes of our youth in the New York City club scene to the careers he discovered and helped construct and, of course, the lives he touched. Rob’s clubbing career started in the ‘90s, when NYC was still a close-knit community of clubs kids discovering their own boundaries and crossing them as they went along.

From doorman to director, Rob sat in every seat at the nightlife table. He never considered himself too good to get his hands dirty or support some lesser-known individual. I could try to explain all of the wonderful, private jokes shared between friends that bring the memory of Rob’s luminous smile back to life.

Here are the life lessons that the legendary Rob Fernandez taught us, as told to DJ Mag USA by a collection of his friends, peers and partners:

PASSION
“Rob taught me so much about life and the business we’re in; lessons I will never forget. Good and bad. But all-important lessons that guided me ahead in my own life. He taught me passion for my work. The ‘air traffic controller of promoters’, I called him.

He knew what was happening out here...in his city. Never missing a beat. Over the last few days Rob’s untimely passing has baffled all of us. How did this happen? Life happens. Things happen. It seems cruel. Unfair. Rob had so much to do still. But the show must go on. The lights will dim. The first track of the night will play.

The first customers will come in. Excited to hear the DJ! The music and the dance will continue. Why? Because that is what Rob would have wanted. He would demand this from us. My heart...our hearts are broken. But in my mind for a long, long time I’ll still see Rob standing in a corner. Texting. Until we meet again my friend ... my mentor. Somewhere under the biggest mirror ball... ever. I will miss you so, so much.” - Benny Soto; best friend, partner, promoter BE MAGIC

“Rob was genuine magic. He made so many of us feel like his special friend... and we were. His hard work, devotion and smile are forever woven into the fabric of NYC nightlife and beyond. The best tribute as an industry would be all of us acting a bit more like Rob on a daily basis.” - Kevin McHugh, manager of Danny Tenaglia

KEEP YOUR COOL
“Rob would never lose his composure. Whenever things got intense, Rob would seem to get very quiet and calm. He would shift into this low-gear, focused person. He never knew how much that helped me. But when I saw that Rob had a handle on things it just made me feel more comfortable. This always kept us focused and allowed us to make good, well thought out decisions.” - Eddie Dean, Owner Pacha NYC, RPM Events 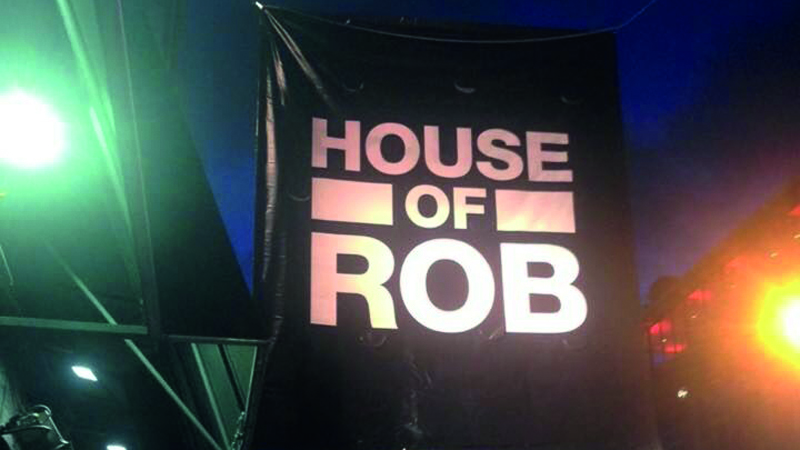 CREATIVITY
Rob believed the only limitations you have are the ones you put on yourself. There is no wrong way to promote, unless you are lazy and boring. Rob taught us to go beyond and push the envelope. Whether is was his birthday party flyer with his face photo shopped onto Demi Moore’s naked, pregnant body or a night called ASSETERIA, Rob never saw boundaries. He looked at empty spaces as opportunities and obstacles and stepping-stones. There is no over-the-top; there is only how far your imagination can go.

LOYALTY & FAMILY
You don’t need to be blood to be a family. For over three decades in the nightlife scene Rob was considered ‘family’ by colleagues and friends from all over the world. He was the kind of person that stayed in touch and called just to see how you were or to shoot the shit.

He believed in community and that house music—and dance music over all—bonds us together. The outpouring of love from all over the world used one particular word over and over: BROTHER. There is not another person I know so deserving of that title. Rob believed we take care of our own. And even if he didn’t know you and you came up to him, he was would greet you like family.

KEEP YOUR WORD
“Rob’s word was his bond. If he promised something, he delivered as best as he could. He never left you hanging or flaked. That’s the type of dude Rob Fernandez was. Everything was always ‘all good’. An important show was stiffing, no worries! ‘It’s all good, Lee. I have a plan here. The room will look great,’ he would say.

Venue was going to get shut down, ‘no worries! ‘Lee, don’t sweat it; this is going to work out. Eddie and I have it all under control,’ he’d tell me. 90% of the time I knew he was full of shit; things were without a doubt hitting the fan, but I always knew he would indeed fix the situation and everyone would have a smile on their face in the end.

That’s what he did. He made things ok. He made people smile. There are days that I hate this business and hate my job. It’s the few amazing spirits like Rob that keep me going and putting one foot in front of the other. They are few and far between, but he was one of them; one of those special human beings that touched every single person he came across and made them smile.” - Lee Anderson, Agent, AM Only

HUMILITY
Rob never took himself too seriously. For a person that was such an icon to so many, he loved to be self-deprecating. All you have to search on social media is #ThingsOnRobsHead to see photos of him balancing pineapples and record players atop his head. Most promoters consider others in their area competition.

But you didn’t want to compete with Rob; you wanted to have a beer with him. He had no ego and had respect from promoters around the world. SuccessRob wasn’t going to work at his events; he was going home.

Rob was not only approachable but was astute in his understanding of the definition of true success. He enjoyed being a part of the crowd as much as he enjoyed being behind the scenes. “I think of success like that—the peace of mind that comes from knowing you have done your best.” - Rob Fernandez

Rob embodied what I believe we all truly want to achieve in this business: A high-quality life that we can take pride in, as well as a successful personal and professional life. Rob left this Earth with a legacy that will continue on through the lives he touched.

His friends carry his spirit with us and in those rough moments in need of calm ask themselves, what Rob Fernandez would do. Rob Fernandez is the love of Vivianna’s life; a father to Rian; a son to Sharon and a brother to Kim and Laurie. Even in the end, Rob was thinking of others—he was an organ donor and several people are now benefitting from his generosity. Rest in paradise, dear friend, until we see you on the dancefloor again.