Marshmello is one of the most Marmite figures in dance music. As loved by his hordes of followers, the ‘Mellogang’, as much as he garners the ire of the underground faithful that feel a novelty  costume isn’t a legitimate form of artistic impression, it’s inarguable that he’s produced one of EDM’s biggest success stories since bursting onto the scene in 2015.

In just over a year, Marshmello has gone from being an unknown artist to a worldwide star. It was only just over two years ago that he uploaded his first song to Soundcloud, ‘WaVeZ’, but it soon turned heads with its popping trap production, wild sub-bass and cut-up vocal samples. More tracks followed and continued to fuse so-called future bass and future house with prog and trap, and eventually maximalist dance star Skrillex re-posted one of them on his SoundCloud page — from then on, Marshmello has been in sharp ascendency.

He followed the stream of his own productions with remixes of high-profile stars Zedd, Jack Ü and Calvin Harris, which continued his meteoric rise, before January 2016 brought self-released debut album, ‘Joytime’, which packed a real punch across ten tracks on his own Joytime Collective label. It immediately climbed up the iTunes charts and spawned singles ‘Keep It Mello’ with rapper Omar LinX, and ‘Want U 2’. Headline slots at festivals around the States ensued, including Ultra Music Festival in Miami, as well as his famous appearance at Electric Daisy Carnival, which saw Tiesto pretend to unveil himself, live on stage, as Marshmello. 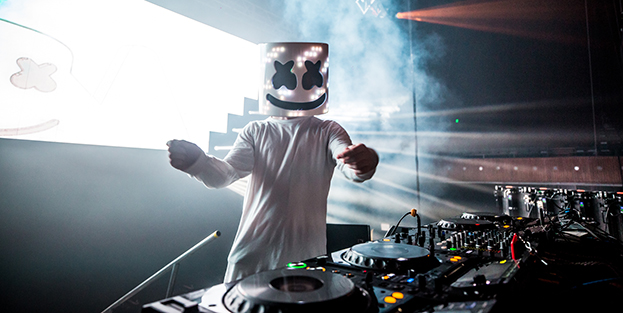 It was later disregarded as a publicity stunt when the two were photographed — both wearing helmets — backstage. But the subject of the mystery man’s identity has endured, with a recent clip by YouTube channel What’s Inside? opening up one of the Mello man’s helmets, and many speculating that Skrillex had finally given the game away via a post wishing the confectionary character a happy birthday on social media.

His preference for anonymity probably explains why Marshmello denied the request for an interview ahead of DJ Mag’s Miami Music Week pool party in March. It’s the same story as when he rocketed into DJ Mag’s Top 100 DJs poll as a new entry at No.28 last year. There he answered only three questions, including stating that he is from “the grocery store”, labelling his DJ style as “everything” and that he’s best known for “being a Marshmello”, before stating “the rest of the questions aren’t really questions we’d like to answer”. 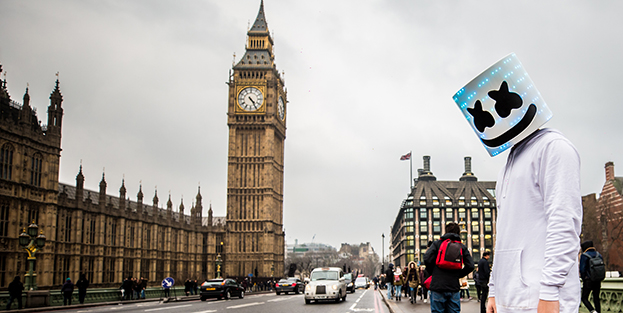 His rapid rise to fame hasn’t gone unnoticed within the industry either. Represented by EDM manager-extraordinaire Moe Shalizi, who also represents Dotcom, Jauz and new-rising star, Slushii, Marshmello also attracted Deadmau5’s attention last year, who labelled him “annoying” and his fans “a brain-dead posse of sheep”. But the DJ/producer has always had a staunch take on bullying, with his Twitter profile featuring a consistent stream of positivity, including “choose love over hate”, “never be afraid to be yourself” and “always remember that we have each other, and that's more important than anything”.

His most recognisable hit is undoubtedly his Monstercat debut, ‘Alone’, which featured on compilation album ‘Monstercat 027 - Cataclysm’ in June last year before becoming Marshmello’s first global smash. It was quickly followed by his first release on Skrillex’s OWSLA imprint in October, titled ‘Ritual’. The DJ/producer hits DJ Mag’s Poolside Sessions during his relentless Ritual World tour, which has already made stops in several countries including the United States, the United Kingdom, China, South Korea, India and Paraguay; his unremitting work ethic summed up on Twitter earlier this year when he said, “I feel it is my job to bring all of us together through music.”