Andrew Weatherall was uncompromising, pioneering, and a true alternative visionary

Andrew Weatherall was uncompromising, pioneering, and a true alternative visionary

Genius is an over-used term, but it is undeniably apt when applied to Andrew Weatherall. DJ Mag’s editor-in-chief, Carl Loben, pays tribute to one of the most influential artists in electronic music
Carl Loben
Facebook Twitter WhatsApp

One of the most respected, important and influential DJ/producers in our scene, Andrew Weatherall, has passed away. The tragic news was confirmed by his management in the afternoon of Monday 17th February in a short statement. He was 56.

A wry, sardonic character with a wicked sense of humour, Andrew was a legend of the underground scene. Uncompromising, pioneering, and a true alternative visionary, his influence on modern-day music cannot be underestimated.

Brought up in Windsor in Berkshire, west of London, Weatherall was a music fiend from the off. Thrown out of school, he was influenced by punk and post-punk and started playing in bands in his teenage years. When the acid house wave hit the UK in the late 80s he was at the centre of it, acerbically chronicling the nascent scene via the Boy’s Own fanzine and DJing at early London acid house club-nights like Shoom, Spectrum and The Trip.

Weatherall soon got into production, sitting in on sessions with Manchester hell-raisers the Happy Mondays, before getting the gig producing tracks on the new album by Primal Scream. A largely ignored Scottish indie band at that point, Primal Scream had taken to accompanying Weatherall on assorted DJ excursions, and when he remixed one of their songs into the dubbed-out, exultant ’Loaded’ — prefixing the track with a “We wanna get loaded and have a good time” sample from 1966 Peter Fonda movie The Wild Angels — it became massive in the clubs as much of the nation’s youth partied every weekend.

His work on ‘Screamadelica’ was simply magnificent: his dubby, blissed-out takes on tracks like ‘Come Together’ and ‘Higher Than The Sun’ captured the UK’s post-E zeitgeist immaculately, and led to the album topping most end-of-year Best Of lists on release in 1991. It won the first ever Mercury Music Prize in 1992, and is still cited as one of the finest albums ever — in any genre.

As the most celebrated producer and remixer in the scene at the time (his work with My Bloody Valentine, One Dove and Saint Etienne was also justifiably lauded), Weatherall could’ve cashed in at this point — but instead took a left-of-centre turn. He set up Sabres Of Paradise with Jagz Kooner and Gary Burns (later both of The Aloof) — most memorably producing astounding chill-out cut ‘Smokebelch II’ that came out on Warp, followed by albums ‘Sabresonic’, ‘Haunted Dancehall’ and ‘Versus’ — and also set up a label and club-night using the Sabres name. At Sabresonic he chiefly span techno and electro, providing a platform for talent from the emerging techno movement and a futuristic soundtrack for the more discerning London clubber. 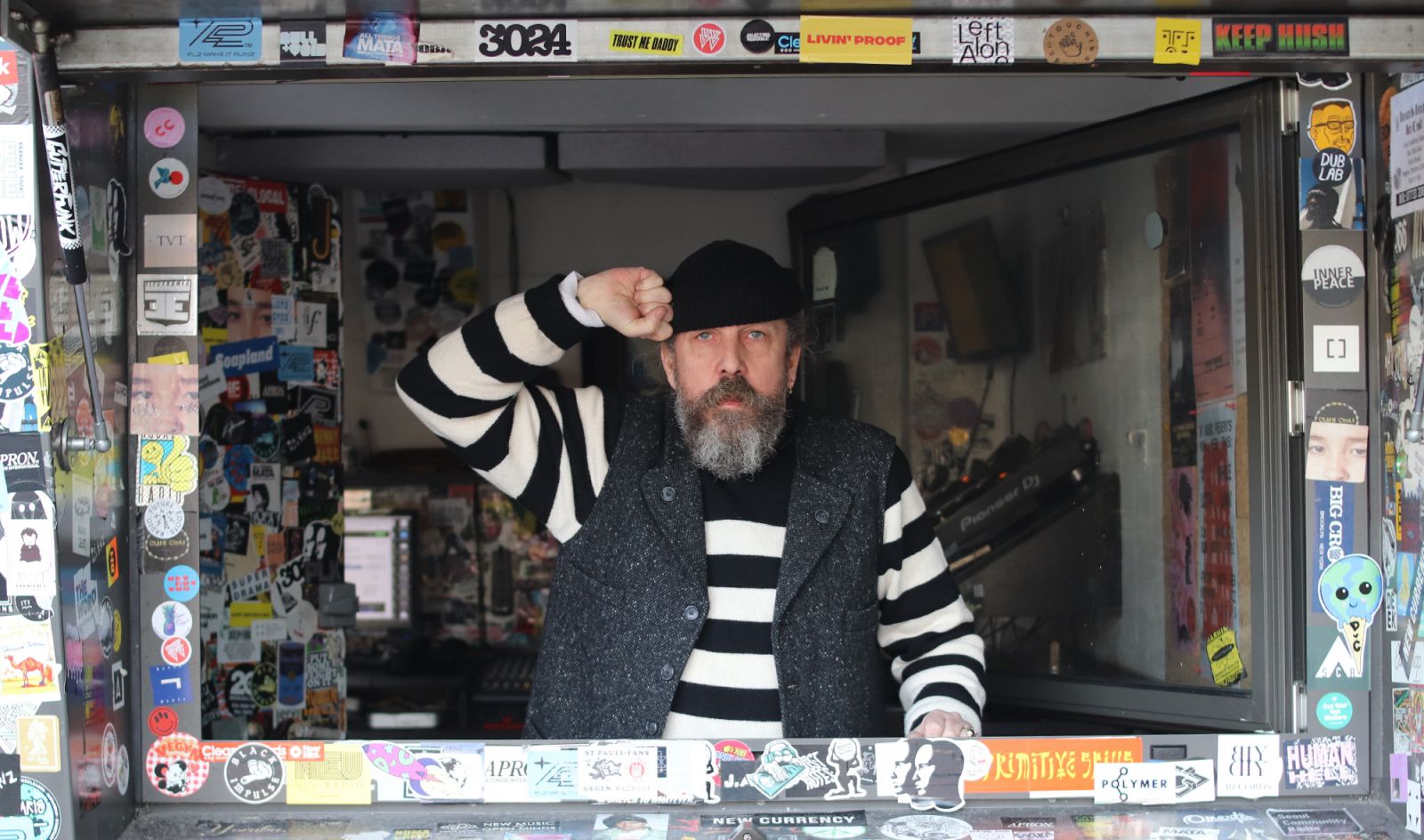 After Sabres dissolved he set up Two Lone Swordsmen with Keith Tenniswood, a number of new labels — Emissions Audio Output, Rotters Golf Club — and then a number of experimental projects over ensuing years, including The Asphodells (with Tim Fairplay) and A Love From Outer Space (with Sean Johnston). He also produced the debut album by Bristol noiseniks Fuck Buttons.

A DJs’ DJ, Weatherall was frequently spoken about in hushed terms by the scene’s cognoscenti as, pretty much, the Ultimate Don. Mixing up cosmic dub, skewed electro, trippy techno, raucous rockabilly and anything else he goddamn fancied, a Weatherall DJ set was always an out-there journey.

Over the years Weatherall was also a prolific lino-print artist; was artist in residence for book publishers Faber & Faber; was terminally a champion of many underground, leftfield artists; and one of the funniest and most down-to-earth people in the business. Genius is an over-used term, but it is undeniably apt when applied to Andrew.

Only last week he announced details of his new, low-slung spacey dub release, ‘Unknown Plunderer’, and was looking forward to a fruitful year which was to include DJ dates under the A Love From Outer Space brand.

Andrew was treated in Whipps Cross hospital in east London for a blocked artery, but sadly died on the morning of the 17th of February of a pulmonary embolism when the blood clot reached his heart. “His death was swift and peaceful,” according to the statement from his management company. The dance scene was united in grief at the passing of one of the absolute legends in the game.

News
Andrew Weatherall’s “Fail we may, sail we must” origin story uncovered by Irish radio DJ

News
An Andrew Weatherall mural has appeared in Edinburgh