Battling cultural stereotypes and lazy genre misnomers, a core set of Mexican artists, based around the NAAFI label and party series, are reshaping the hybrid sounds of their homegrown club scene and injecting a sense of pride into the national identity

Music is a language, but sometimes the intricacies of a sound can get lost in translation. One night in Berlin in 2018, Wasted Fates was trying to get a dancefloor moving to the sounds of tribal, a sub-genre of Mexican dance music that bumps along on a triplet beat. Berliners are notoriously loyal to the 4/4 techno stomp, and most of the crowd “weren’t having it,” he remembers.

“Though a few were like, ‘This is amazing, I’ve never heard this in my life. It sounds like tropical hell!’” High praise, but a revealing choice of words. The rich and diverse musical traditions of Latin America are still barely understood outside the continent — only a part of which is actually tropical, after all — but a fresh generation of producers and DJs are on a mission to change that.

The tribal sub-genre is one element of the nebulous sonic aesthetic of NAAFI: a club collective that began almost a decade ago, when co-founders Wasted Fates and Lao threw their first party in Mexico City. Taking cues from drum & bass, techno, Mexican hip-hop, and South African house, the producers and DJs of NAAFI also shared a fascination with the traditional and folk styles of Latin America — brass-heavy banda, rolling reggaeton, and the near-ubiquitous rhythm of cumbia.

A few weeks after releasing his ‘Turbio’ EP, a dark concoction of dembow, dancehall, and grime, inspired by the drug wars that have ravaged his country, Wasted Fates was in Barcelona, performing on the Red Bull Music Academy stage at Sónar 2019. Playing a back-to-back set with Lao, they unleashed a mosh-pit maelstrom of cross-pollinated club styles, blending booming trap bass with fragments of Latin instruments and triplet rhythms.

Fausto Bahia is from Puerto Escondido, a beach town in the southern state of Oaxaca. When he moved to Mexico City for university, he started a music blog, writing about foreign artists like Jamie xx alongside local talent, like experimental producer Paul Marmota. Lao is from Mexico City. In 2010, he got involved with the second-ever NAAFI party, joining Fausto Bahia and Mexican Jihad. Wasted Fates joined them some years later.

NAAFI’s base is a studio in Mexico City near Chapultepec, the city’s biggest park and the lungs of an urban expanse that’s home to 30 million people. The building looks abandoned from the outside, and inside are two rooms: an office, and a studio with a vocal booth. You’ll find Wasted Fates there almost every day. Lao oversees the A&R for the label, as well as running his own, less club-focused imprint, Extasis.

Both now in their 30s, Lao and Wasted Fates grew up listening to everything from tear-out drum & bass to poetic Mexican folk ballads. Sometimes, remembers Wasted Fates, a huge sonidero — a mobile sound system built onto a truck — would turn up at his middle school, to play reggaeton, cumbia, rock, and pop to the excited kids. “So everything was blended,” he says, “and I feel like a lot of people had that same influence.”

At the same time, Latin styles like reggaeton, dembow, and bachata — all based on different rhythms, sounds, and language than imported Anglophone pop — tended to be looked down on, dismissed as tacky or uncool compared to US styles like hip-hop, techno, and house. There’s even a word for it – “malinchismo,” a preference for foreign imports over local culture, an effect of a deep-rooted inferiority complex.

“At the beginning [NAAFI] wasn't [about] a sound aesthetic,” explains Lao. “We tried to make a resistance for weird kids, a space for alternative club music. Anything that’s around techno and house — but not that.” On early tours outside Mexico, Lao remembers, they’d sometimes see their names on flyers alongside images of cacti and sombreros. “When we started, it was super easy to get patronised,” he laughs. “We were trying to be responsible in the way we were putting out the music – probably being over the top with the text we wrote about the music. The idea was to break the stereotype of what being a Latin American really is.” 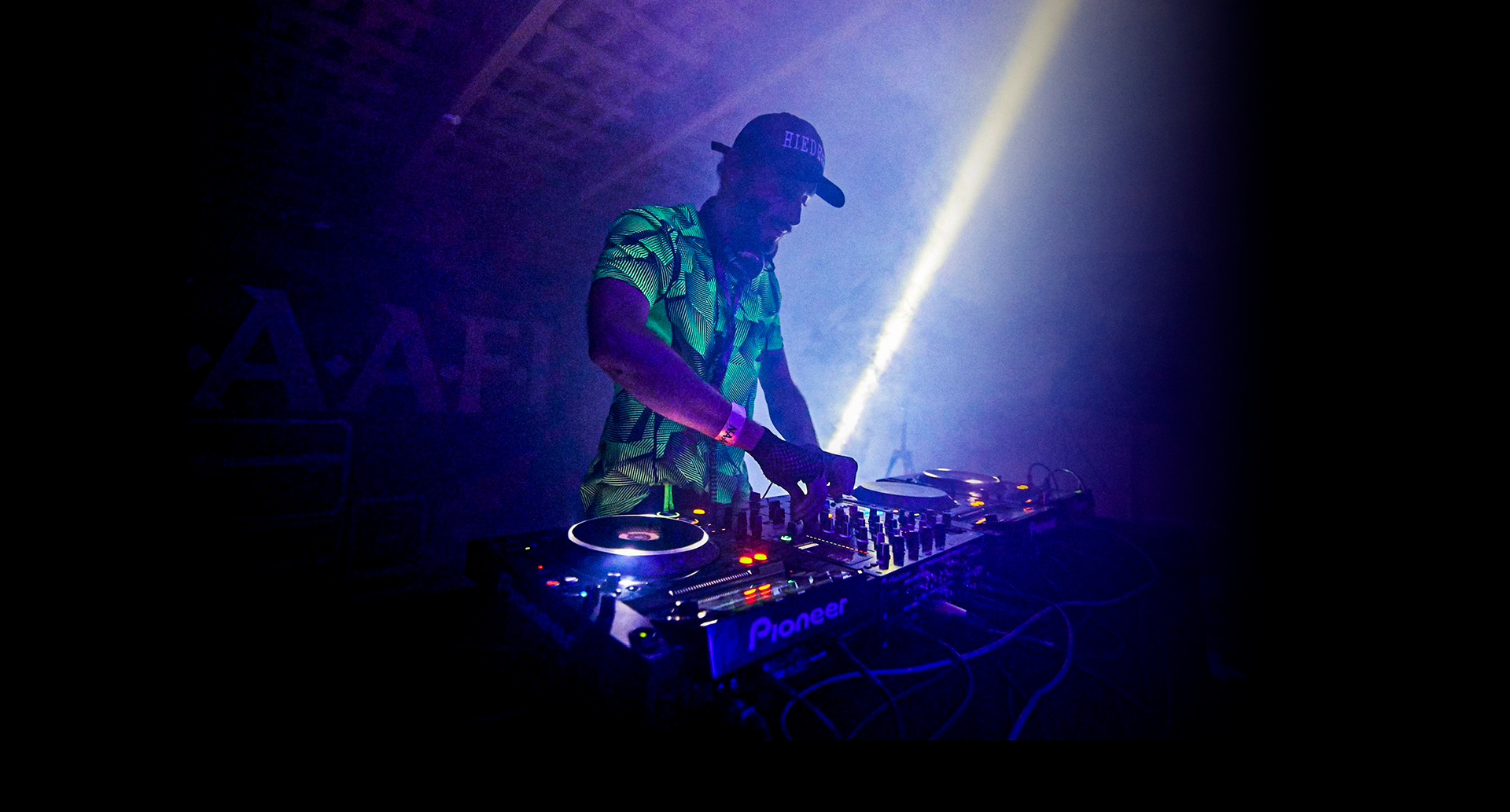 "They’ve come to represent an emerging faction of Latin American youth who are rejecting the “malinchismo” attitude that prizes imported culture. But while NAAFI has come to represent the cutting edge of Mexican club culture, the crew are also suspicious of any monolithic conception of ‘Latin America’."

Since those early tours, NAAFI have made it their mission to restore the cultural value of homegrown musical styles, while updating them for a new generation of clubbers. A NAAFI artist’s palette might include the ticking percussion of cumbia or the electronic samples of reggaeton, which have long histories across the region but are often unfamiliar to European audiences.

“There are sometimes cultural gaps when you play this kind of music — this triplet element is very rare in music in Europe,” Wasted Fates points out, thinking back to his Berlin gig. “But I really like it when people react positively to tribal music, because it’s a whole different rhythm than what they’re used to. They didn’t know they could dance to it.”

This mission means that the label has frequently switched direction. In 2014, they released a three-disc compilation of tribal, cataloguing the electronic-meets-folk subgenre which bubbled up in the early 2010s, and clarifying three regional variations of the style. Then came the ‘Pirata’ series, where producers like Imaabs, Smurphy, and Lechuga Zafiro offered zany club and pop mash-ups of Justin Timberlake and Tinashe, M.E.S.H. and DJ Marfox. This year’s highlights have included Wasted Fates’ ‘Turbio’ and ‘Grandes Éxitos (Vol. 1)’, a collaboration between Chicago footwork star DJ Taye and Siete Catorce, a stalwart of northern Mexico’s experimental club scene.

Though NAAFI is a label, high-concept parties are the core of their operation. They’ve hosted a New Year’s Eve bonanza in Puerto Escondido, featuring international allies like Gaika and Jubilee, a six-month DJ residency at a contemporary art museum in Mexico City, and vogue balls, one with US ballroom DJ MikeQ. In the NAAFI philosophy, everyone is welcome — no matter their race, their sexuality, or what shoes they’re wearing.

NAAFI parties have also influenced a new generation of Mexican artists and promoters, disrupting the dominance of house and techno in Mexico City and inspiring crews in smaller cities like Monterrey, Guadalajara, and Morelia. “There was a time when people wouldn’t even play this type of music at clubs,” says Wasted Fates, but “in the past two or three years, I’ve seen more parties and collectives popping up, emulating the same strategies we use when we’re producing parties and making connections with people from abroad.”

One of NAAFI’s more recent recruits is DEBIT, a Mexican-American producer and DJ. She emigrated to the US as a teenager and now lives in New York, where she’s studying music technology. Her recent ‘System’ EP is a “reconstruction” of tribal guarachero, a variation of tribal from her hometown of Monterrey. DEBIT sees tribal guarachero has having suffered from a kind of “classist self hatred,” in that “it’s a genre that’s been left aside, sometimes clearing the dancefloor” at parties in Monterrey. Her EP is a minimalist reimagining of the boisterous, airhorn-filled style, focusing on the percussion patterns at its core.

“I wanted to try to take something that was ours, or mine, back to its roots. I wanted to strip the melodic content [out] and fill up the spectrum with industrial and oscillator noises.” She laughs at the idea of tribal being described as “tropical hell”, pointing out that Monterrey is surrounded by bone-dry desert. By exploring the particularities of one, hyperlocal strain of an already niche sound, DEBIT’s music challenges a reductive perception of Latin American music, which tends to lump together many diverse, triplet-based styles as vaguely “tropical.” Think of the 2010s chart success of “tropical house”, a lazy miscategorisation of dembow-based pop.

DEBIT’s music represents one of NAAFI’s many connections to North and South America: artists like Imaabs from Chile, Lechuga Zafiro from Uruguay, and Tayhana from Argentina; Houston’s Santa Muerte, a DJ duo mixing reggaeton with hip-hop and grime, Buenos Aires’ queer-friendly party crew HiedraH, and Montevideo experimental label Salviatek. They’ve come to represent an emerging faction of Latin American youth who are rejecting the “malinchismo” attitude that prizes imported culture. But while NAAFI has come to represent the cutting edge of Mexican club culture, the crew are also suspicious of any monolithic conception of ‘Latin America’.

Lao sometimes feels that his Mexican identity is exoticised by outsiders, “but I need to play that to my advantage as well,” he laughs. “We have always bragged about being promiscuous in that way. Of course! I mean, if someone is paying me £2,000 to play, like, [Mexican chain restaurant] Wahaca in London, I will definitely go.” It’s contradictory, but it can work to his advantage. Still, he says, “I have turned down many offers where [the emphasis on his identity] is super obvious.”

With NAAFI approaching its 10th birthday, the DIY crew has matured into a serious, strategising operation. Davó points to labels like Warp and Hyperdub as his inspiration, “labels who found a way to establish themselves with longevity. That’s our goal, to have our artists prosper, and to have a label that can age well.” Big celebrations are planned for next year, including a new line of merchandise and parties around the world.

The releases are stacking up, too. Argentinian producer and DJ Tayhana, co-founder of the HiedraH collective, is preparing her debut album, and Brazilian avant-pop star Linn De Quebrada has been recording with the crew. Wasted Fates is already making progress on a new release, exploring more abstract, architectural themes. “I’m trying to deconstruct [the music] more — not in the sense of ‘deconstructed club music’, but by showing parts of the song and then removing elements, to leave just the structure,” he hints. “It’s like if you could see the columns and electricity wires behind the walls of a building.” Lao has been working on a new solo album and a “pop, trip-hop, and electronica” record with New York’s Nick Hook, as well as overseeing an album for UK dancehall artist Gaika, featuring beats from NAAFI producers.

Mexico City itself is better than ever. It’s becoming increasingly cosmopolitan, says Lao, with even more festivals and venues opening and taking risks with their bookings. This summer, his beloved Aphex Twin came to town for the first time. “But more than new venues, it’s fresh ears and new people on the dancefloor, which is important. People learn from each other how to react to the music. I like to see people that I’ve never seen out dancing before.”

Lao used to be concerned about how outsiders were hearing and interpreting his music — would they enjoy it? Could they even understand it, if they weren’t from the same culture? “But now I just know that people like listening to tribal beats and rhythms. There’s no formula. Kids just like the syncopation, the triplets — that response to a 4/4 kick and breaking the pattern. For many people, that’s super new. There are people in some places that have never listened to that.”