Defqon.1 headed to down under for its annual Sydney-based event earlier this year, with sets from Brennan Heart, Gammer and Evil Activities topping the stacked bill.

The festival has now uploaded the event’s insane 18-minute aftermovie — that you can watch in full below — which features stadium-style production, eyeball-burning banks of pyrotechnics and an impressive assortment of hardstyle anthems.

Spectrum Dance Music Festival has revealed full details for its ‘The Next Music Is Paradise’ event, which is set to take place in Seoul, South Korea on Saturday 1st and Sunday 2nd October.

Dimitri Vegas & Like Mike and Kaskade both headline the event, whilst Brennan Heart, Don Diablo, Duke Dumont, Galantis, Marshmello and Sigma are all set to perform across the weekend.

Spectrum Dance Music Festival’s ‘The Next Music Is Paradise’ event touched down in Seoul, South Korea on Saturday 1st and Sunday 2nd October, establishing itself at the top events on the Asian festival circuit.

Dimitri Vegas & Like Mike and Kaskade both headlined the event, whilst Brennan Heart, Don Diablo, Galantis, Marshmello and Sigma all performed across the weekend.


Brennam Heart emerges from lockdown “ready for the future”, whatever that may bring. If there’s a confidence looking forward, it’s perhaps because the last twelve months have seen the Dutch hardstyle DJ and producer mark his pedigree with plenty of milestones. Compilation album ‘20 Years Of Brennan Heart’ underlined his prolific studio work over two decades, laying the ground for a celebratory party at this year’s ADE. His I Am Hardstyle radio show then celebrated its 100th edition, with a huge cast of guests joining him on air. And if you had any doubt about the esteem he’s held in, ‘Brennan Heart And Friends’, released at the end of 2020, showcased a host of collaborations he co-wrote during lockdown.

With an ear and eye for the grand, June saw Heart DJ in the middle of the Formula 1 track in Zandvoort. And as the future arrives he meets it head-on, newest single ‘Thunder’ leading you from its sweet chorus to a slamming drop.


How was your first gig back after lockdown?

“Surreal! After such a long period of not having any events, each show I do only feels real now once I come off stage. Then I know it really happened.”

How have the last 18 months changed how you view your work/life balance?

“At the moment, I feel better than ever! For example, yesterday I did a 155km mountain bike ride on my own, which was one of the best feelings ever. I’m really grateful for the things I’m able to learn at the moment.”

What further steps should the industry take to combat climate change?

“I don’t think it’s something for the industry in particular. It all starts with awareness on a personal level.”

What’s the best bit of tech you’ve added to your studio or DJ setup this year?

“I just built a radio studio for my show that I’ve been doing since 2013. In my production studio, I’ve added an original Roland TB-303, built in 1982. Nothing beats the sound of these analogue synths!”

Brennan Heart has been working in the music scene since he was 18, which is now 20 years ago. In that time he admits there have been a whole load of ups and downs, and so he decided he wanted to share them in his new book, HARD, which is available for free from his website. “I really wanted to show [the music industry's] struggles but also beautiful moments, to show you what made me into who I am today,” he says.

This year he has also enjoyed more time at home with family, while his highlight was spending a lot of time in his new studio making lots of new tracks, which has resulted in his collaboration-heavy new upcoming album ‘Brennan Heart & Friends’. “I try to take each song as it is, whether translated to pure hardstyle or more radio-suitable music. Last year I worked together with the Metropole Orchestra to recreate my hardstyle song ‘Hold On To Tomorrow’ as a classical piece for the national campaign of KWF, a Dutch Cancer Society.”

He signs off by saying he is also working on a “three-minute hairstyle song”, which surely would be a world's first.

What three things have most helped you through Coronavirus Lockdown?

“Spending time with my family and kids, my new studio complex, and my Boretti barbecue!”

What lessons should the industry learn from this crisis?

“You shouldn’t take things for granted. As an industry, we should be thankful for every opportunity we get to travel around the world doing what we love.”

What steps need to be taken to address the racism in the dance music scene?

“We need to educate people about the history of racism. Especially when it comes to dance music, we have a lot to thank for the African-American contribution to the music we call dance today.”

What industry changes are you personally pushing for to make the dance music scene more inclusive?

“I think it’s most important for people to realise that this fast-paced industry requires hard work. It’s a quick world with a lot of macho behaviour, while in fact, we should care much more about each other.”

What’s the greatest dance music track of all time?

From: The Netherlands
DJ style: “Hardstyle.”
Best known for: “Tracks with harmonious melodies and catchy vocal lines, like scene anthems ‘Lose My Mind’, ‘Imaginary’ and ‘Won’t Hold Me Down’. And my remixes lately with Dimitri Vegas & Like Mike, Armin van Buuren, and Tiësto.”
Fave tune of 2018: “The I AM HARDSTYLE anthem I did with Toneshifterz, ‘Define Yourself’.”
Breakthrough DJ/producer of 2018: “Almklausi.”

Another face flying the Dutch flag in our Top 100 DJs poll for 2018, Brennan Heart, aka Fabian Bohn, has been amongst hardstyle’s most prolific producers and DJs since first emerging onto the scene as one half of Blademasterz in the early-noughties.

The years between then and now have seen him rise to the top of the scene’s pecking order, with his radio show, WE R HARDSTYLE, helping spread his sound to the territories his packed touring schedule doesn’t hit. Which is very few, considering bookings in October 2018 alone included China, France, the US and Canada.

Tour dates aside, the last 12 months have seen a slew of hugely successful releases from the man in question, including the official Decibel Outdoor anthem, ‘Fuelled By Fanatics’, that Rebourne collaboration, ‘Ravers Memory’, his remix of Armin van Buuren’s bomb, ‘Blah Blah Blah’, and reworking of Dimitri Vegas, Like Mike and Whiz Khalifa’s ‘When I Grow Up’. All of which explains his eighth consecutive entry in our hallowed hall of fame.

“My life is all about touring and making music,” he tells DJ Mag. “In between I was lucky to spend some time with the family, but mostly airplanes and music studios. Living the good life.”

Dutch hardstyle producer Brennan Heart has had one of those years. “I thought 2014 was madness, but 2015 topped it… crazy”, he sighs. “At the beginning of the year I took one and a half months break in Bali... to recharge myself, regarding my future, plans and ambitions.”

That rest was warranted, surely. In between broadcasting his radio show on SlamFM (‘WE R Hardstyle’) and manning stages at EDC and Defqon.1, the producer’s been heading up his own WE R Music label, and is revered by his fans for arena smashers such as ‘Follow The Light’ and ‘FIFO’ (standing for “fit in or fuck off”).

To get away from the madness of the jetsetting lifestyle of an international DJ, he’s just treated himself to a new crib: a “beautiful cottage in the countryside, enjoying life with my girlfriend. But no worries for the fans: there will also be a new studio next to the house!” he assures DJ Mag.

“My passion for music is the thing that keeps me going, but I need to make sure that any spare time I have is spent with family and friends.” 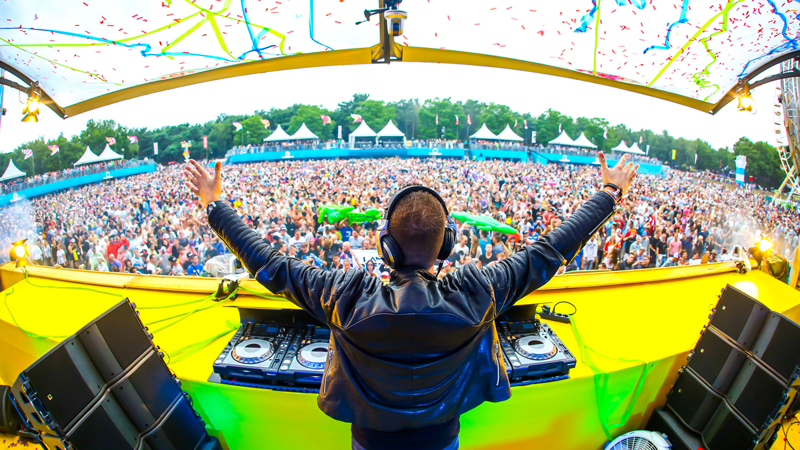 Submitted by Jon Dommett on Mon, 2015-11-16 11:12
Style:
“Hardstyle.”
Best known for:
“Tracks like 'Lose My Mind' and 'Imaginary'.”
Tune of the year:
“Blademasterz 'Still Here'.”
From:
Holland
Breakthrough DJ/producer of 2015:
“Sub Sonik.”
What’s the most important skill a DJ should have?:
“To analyse how people react to a variety of tracks. In some places hardstyle is pretty new to the audience, so I play different tracks and remixes than when I’m playing Benelux.”
Is the future still bright for EDM?:
“Electronic music still is a very young genre and constantly evolving. That's what I like about music: it's dynamic and renewing itself, and I'm still stoked when I hear a great sound or a catchy melody.”
Does the constant travelling and DJ lifestyle ever take its toll on you mentally?:
“Sure thing. Travelling is demanding for everyone, but it's part of a great job. You can make a fuss about each delay, but it won’t change anything.”
What cause is closest to your heart?:
“The refugee situation is tearing me apart. It's really hard to find good and permanent solutions for people that are forced to leave their homes.”
Which club would you like to bring back from the dead?:
“I'd like to bring back some smaller clubs from when I started, as I find it important that there are clubs that offer opportunities for new talent to play.”
Why aren’t there more women in the Top 100 DJs poll?:
“That’s a question for the DJ Mag readers. They are the voters! I think it's just a matter of numbers. If you calculate the total number of female DJs compared to male, it's only a few percent...”
What do you think of DJs who use ghost producers?:
“It's a kick when you create something new, and you can't wait to play it for other people. It can create the same goosebumps as going out on the main stage of Defqon.1 or EDC with 60,000 fans in front of you.”
Top 100 DJs2015Brennan Hearthardstyle