Fancy building your own MIDI controlled musical machines? Then check out Dadmachines new Automat Toolkit, which has just launched on Kickstarter.

An ambitious project from the Berlin studio, the Automat Toolkit is a bit like lego for adults with musical ambitions, that allows the user to build musical instruments using everyday objects.

At the centre of the build is the Automat controller, a plug-and-play MIDI unit that has 12 DC outputs, which can be plugged into a selection of solenoid motors that can transform near enough anything into a musical instrument.

There is no limit on how far you can push the Automat — it's perfect for simple one hit wonder to a complete robotic set-up playing a range of home-built instruments.

Dadamachines stress that building your musical robot/instrument is pretty easy and anyone can get in on the fun.

There are several packages on offer on the Kickstarter site, from the basic Automat controller to a range of cool add-ons including motors, microphone stands and the various adapters.

Pledges start at €89 for a DIY Automat board up to €499 for the large toolkit, and if the funding round is successful fans can expect to see the fruits of Dadamachines’ labour from August 2017. 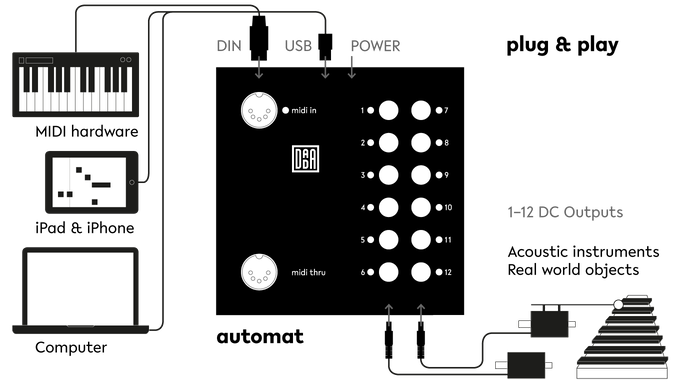